For much of the second day of my road trip exploring Central Otago in New Zealand, I’ll travel alongside the famous Central Otago Rail Trail and fossick around the villages along this part of its journey.

First call was in Naseby, a town which did not rejoice at the coming of the railway early last century.

Below the Ida Range, tucked away in forestry surroundings, the village of Naseby is quite a charmer. The town used to be a major gold mining centre with as many as 5000 diggers working their fingers to the bone in search of riches.

It was, at that time, the administrative centre of the region, an important place with a courthouse, banks and county offices.

They keep the home fires burning on a crisp Nasbey Morning. 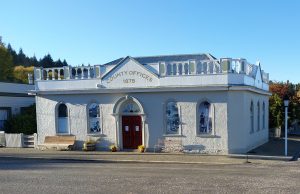 The old county office in Naseby.

The railway, however, skirted the town by some distance and Ranfurly sprang up as the new centre of attention.

Naseby slowly slumbered off into irrelevancy but over recent years it has become a popular holiday destination.

Ever thought about giving curling a go?  It’s a bit like lawn bowls but played with stones on an ice rink. Naseby has the only indoor curling rink in the Southern Hemisphere which means you can visit any time of year.  You can also go ice skating, or hurl yourself downhill in a luge at Naseby Ice Rink, Luge and Snow Park

In the absolute darkness so far from any light pollution you can get an introduction into the mysteries of the night sky with Naseby Night Sky Tours. 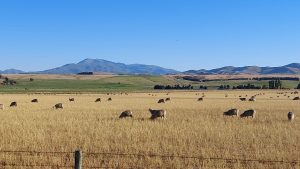 Sheep grazing in the early morning sun near Ranfurly.

Next, another side trip, this time to Oturehua, about 5 minutes from the main road, and well-worth the diversion. 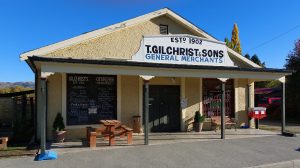 Gilchrist’s grocery store there is a genuine classic.  It’s just priceless . . . exactly like grocery stores were when I was kid. Those were the days when all the goods were stacked on shelves behind the counter and the grocer fetched each item as you read it from the list. This is exactly the same. Take a camera and get a shot of the way life used to be in the very last real grocer’s shop of all time. And buy something – to help keep the dream alive. 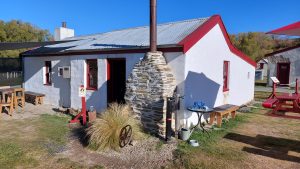 The cafe at Hayes Engineering Works

Hayes Engineering Works, does not, at first blush, sound like somewhere you might while away an hour or so. Wrong. Earnest Hayes was a clever bloke. After arriving in the area in 1882 he started inventing tools to simplify work on his farm but before long his inventions found a ready market locally and even overseas. Things like windmills and rabbit bait cutters, but particularly a fencing wire strainer, the design of which is still in use today.

The workshops are an insight into how things were done and the ladies at the café, housed in a replica of the original cottage, do a fine rendition of  morning/afternoon tea.

Then back on and off the highway to go to St Bathans.

You’ve got to work at it to get to this tiny hamlet – but it’s worth it. 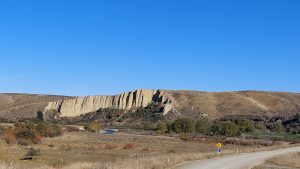 It was a mining town that slowly fell into decay. The last settlers walked out in the 1920s. But in the 1960s a new breed of pioneers walked back in – and kept it just as they found it. 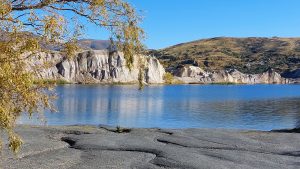 Nearby is St Bathans Lake. It was created by the landscape-ripping process of sluicing for gold. But the real attraction is the Vulcan Hotel. If you don’t mind basic accom. then this is one of the must-stays on your visit. 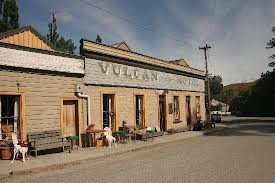 It’s as old as the hills, built of mud. The walls are about two-feet thick. And the company at the bar is local and colourful.

The last time I was there I was still drinking at 4 in the morning with a bunch of shearers who had just finished a big Merino contract on one of the nearby stations.

They were knocking back handles of beer with 5-oz whisky chasers – and that was the women. Gawd knows what the blokes were putting away.

I was well past taking in that sort of detail.

One of my drinking buddies that night – much earlier in the evening when I still retained a degree of cranial clarity – was a local miner who was convinced that any day now he was going to hit the real big pay dirt. Just like every other miner anywhere else on the planet. I suspect he’s still digging.

The White Horse Hotel at Becks.

The Old White Horse Hotel on the n. side of the road in the next village, Becks, is one of 10 oldest hotels or former hotels on the New Zealand Historic Places Trust register,  but what makes this building something special is its location:

John Nixon Beck was probably not aware of that item of geographical trivia when he built the stacked stone hotel in 1864.

On to Lauder, miles from anywhere, which is reputed to have the cleanest and most pollution-free atmosphere in the world.

That’s why, not far away, NIWA (National Institute of Water and Atmosphere Research) in 1961 established its atmospheric research facilities. Today research is being carried out into the depletion of the ozone layer and climate change.

The locals have always been enterprising. The Lauder Hotel originally faced the railway.  When the line closed, the publican had it lifted up and turned around to face the road.  Today, it is once again the railway line that is breathing new life into the village.

In Omakau the old stone stables alongside the Commercial Hotel were used as the location for one of the country’s best known beer ads . . . “The Deerstalkers’ Ball”  It’s worth a look on YouTube.

On a side road are the old gold mining ghost towns of  Matakanui and Drybread. If you have tons of time and a hankering to fossick around among historic ruins then this is a side trip worth the taking. Take Racecourse Rd from the centre of the township. 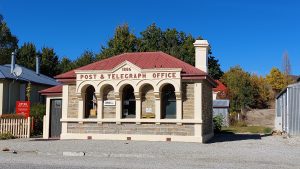 Took another diversion to nearby Ophir, named after the biblical port of Ophir, famous for its wealth and from which the Queen of Sheba sent gold, silver and other tribute to King Solomon. Ophir – the New Zealand one – was originally called Blacks, after a couple of farmer brothers on whose land gold was found in 1863.  The gold rush never did mount to much but it gave the town a start.  It became the administrative centre for the Manuherakia Valley . . . .which accounts for the splendid Victorian buildings such as a post office, courthouse. and police station.

At its peak it had a population of 1000 souls but when the railway engineers decided to build the proposed rail line on the far side of the river – rather than constructing an expensive bridge – Ophir began its long decline and neighbouring Omakau blossomed.

The original town name still lives on as the name of the local hotel, Blacks.

Apart from its cute buildings – which are well worth the few minutes diversion to see – the town is also famous, after a fashion, for having the coldest temperature ever recorded in the country.  Minus 21 deg C in July 1995. (Can hear you Alaskans and Canadians muttering “tropical”?).  It regularly records the country’s coldest winter days and hottest summer days.

Then it’s on through Clyde, Cromwell and the Kawarau Gorge to Queenstowntown, Best way to describe that is with pictures.  (It’ll save thousands of words). 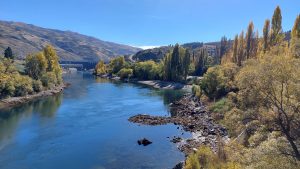 The Clutha River from the Clyde Bridge. 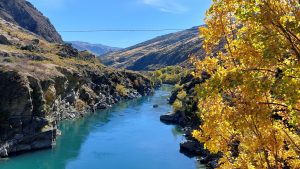 Kawarau River From the Goldfields Bridge. 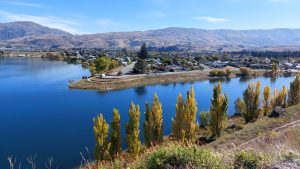 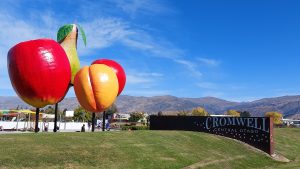 Half way along the Kawarau Gorge you come to Roaring Meg. Said to have been named after Maggie Brennan, a rambunctious, loud-voiced, red-haired barmaid in one of the goldfields pubs. It’s a wild, rocky canyon strewn with great green glittering schist boulders thrashed by torrents of water. It’s well worth the stop if only to enjoy one of nature’s little wild rivers. In a country where, if they could, the mad power planners would dam every river with hydro potential such places are becoming all too rare. 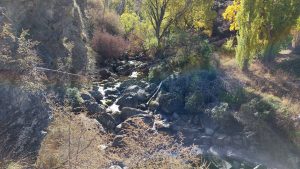 Having said all that, guess what?  Across the road, just below the outlet of Roaring Meg into the Kawarau River, they’ve built a power station.  It is, however, reasonably unobtrusive.

At Roaring Meg there is also a lookout point that gives you a great view and photo op of the Kawarau Gorge.

Roaring Meg is the torrent gushing from the power station in the distance. 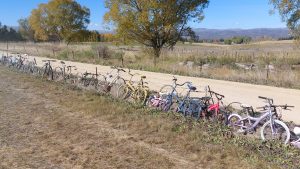 Queenstown was the overnight stopover. Foraging for a suitable dinner haunt I decided to go to one of the town’s long running institutions, The Cow. Been there 40 years and still as good as ever. One of the few upsides to the rotten Covid pandemic is that with the slowdown in the hospitality industry it was possible to get a table immediately. Back in the pre-Covid days you could wait half an hour. 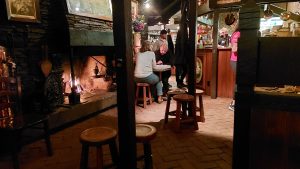 Unfortunately I somewhat over-indulged. I don’t usually order soup, mainly because I think it’s too expensive, but their mushroom soup sounded too good to pass on. And it was.  Far too good. Huge chunks of mushroom in a  creamy deliciousness. It was a  meal on its own, but I had ordered one of their pizzas because I knew they did a damn fine rendition of that Neapolitan standard.

Having ordered it I felt obliged to eat it. It was the last three slices that did me in. I should have left them be, but that would be a criminal waste.  It’s a wonder I didn’t end up like the exploding diner in Monty Python’s Flying Circus skit.

« Central Otago: A road trip through one of NZ’s most dramatic landscapes
Wonderful Wanaka On A Central Otago Road Trip »