Yet she is a reason you are reading this in English, not French.

It all started with Magna Carta, the great charter that limited the power of the king.

In 1215, King John, one of England’s least capable monarchs, had been forced to sign it after pressure from the English barons.

Within weeks, however, he began reneging on the promises he made, a matter that did not go down well with the nobles who divided into two camps – those that supported the king and a group of rebels. Civil war ensued.

The rebel barons invited Prince Louis, son of the French king, to take the throne.  He mustered an army and arrived in Kent in May 2016, declaring himself King of England on arrival.

John died in October 1216. His successor was 9-year-old Henry III who inherited a deeply divided country. The whole of the east coast from Dover to Lincoln was in the hands of the rebels. Lincoln Castle, however, held out against them.

Enter the redoubtable Nicola de la Haye. In an era when women were little more than their husband’s property, she was exceptional. When her minor noble father died, she inherited the title of Constable of Lincoln Castle.

When war came to the castle gates she was in her mid-60s but under her canny command the fortress held for months against the siege. 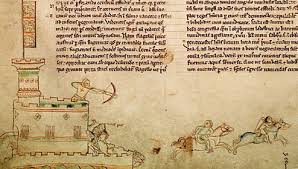 Crossbowman shooting from the castle walls

The famous English long bow may have been the weapon of choice in that time, but Nicola used crossbowmen to hold the walls.

The long bow was excellent in open warfare, but on crenelated walls a long bowman had to stand well back from the wall in order to shoot.  A crossbowman, with a more compact weapon, could fire from the wall itself with devastating accuracy.

Nicola used them with deadly effect.

Against the might of a combined French and English army she held the castle until a relieving force under the command of the famous William Marshal, arrived to relieve the siege.  The invaders were defeated and returned to France. 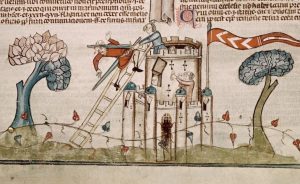 The defence of Lincoln Castle

Historians place this, the Battle of Lincoln, as among the three most important battles ever fought on English soil, along with the Battle of Hastings and the Battle of Britain. (OK it was fought in the air.  Don’t split airs.  Sorry, bad pun).

Had it gone the other way Louis would have become king of all England and, as I said at the start, you would probably have been reading this in French.

King Henry III continued to refer to Nichola as “our beloved and faithful Nichola de la Haye” in acknowledgement of the significant role she played in saving his kingdom. Royalist writers referred to her as ‘a worthy lady’ deserving of God’s protection ‘in body and soul’.

Historians have named her ‘the woman who saved England’, yet her story is one which very few know about.

« What Is The Best Time Of Year To Visit Britain?
Central Otago: A road trip through one of NZ’s most dramatic landscapes »