The final day of my road trip through beautiful Central Otago was as varied as the landforms I travelled through.

(I’m reporting this somewhat post-facto because of the unfortunate necessity of having to earn a living to pay for all this fun stuff. And work has been busy now that we are out of at least some of the Covid-induced restrictions).

Took the Crown Range Road from Wanaka.  Along the way is the famous Cardrona Hotel.  It has been there for nigh on 160 years.  Its most colourful publican was a man named Jimmy Patterson who ran it from 1926 to his death at 91 in 1961. 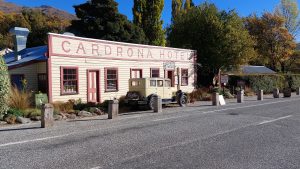 His hygiene routine left much to be desired. He kept a wooden barrel that was filled with rainwater from the roof.  When a patron finished with his handle of beer Jimmy would swirl the glass around in the barrel and hang it up ready for the next customer.

He did, however, control the amount of alcohol his patrons could imbibe. Those travelling south towards Queenstown were allowed one drink because they would have to navigate the notoriously twisting road ahead. Those heading north to Wanaka, on a level road, were allowed two drinks.

How’s that for early host responsibility?

These days it’s a classy gastro pub that caters for skiers in winter as well as passing road trippers. 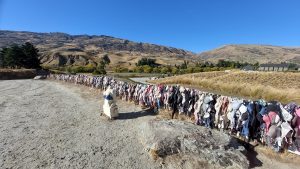 The bra fence at Cardrona

One of the more bizarre local “attractions” is the famous (or infamous) “bra fence”  – hundreds of women’s bras tied to a local fence.  Why?  Don’t ask me. Maybe it’s because they can.

I, too, had to pick my way down the steep escarpment that falls from the Cardrona Valley floor to Arrowtown below and one of the hazards is the temptation to look at the scenery.

I was heading to Coronet Peak, near Queenstown for another adrenalin rush-inducing leap into mid-air . . . tandem paragliding from the peak.

And what a buzz it was. Strapped to pilot Keith Rapson from Coronet Peak Tandems we made a short run down a slope high on the side of Coronet Peak and within seconds the big wing rose into the air . . . and so did we.

Again, I wasn’t the least bit worried about it all.  (Well, OK, just a little bit before we took off) but again, like the parachute jump, I was quite relaxed because of the professionalism of the pilot who quietly explained how it would all go down.  Literally . . . go down. About a thousand feet, I guess. 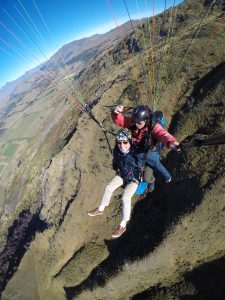 Paragliding down the slopes of Coronet Peak

Once in the air we drifted silently above the drop-dead gorgeous Queenstown landscape. For a moment there was a sharp ridge that seemed alarmingly close, but we cleared it by, I guess, about 50 feet.

Then it was my turn to fly the device. It’s controlled by two handles attached to the lines that connect to the wing.  Pull the both handles down and you climb, allow them to rise up and you descend. (Or is it the other way round.  I don’t remember). Pull the left handle down and the wing veers to the left. Vice versa for the right handle.

For about two minutes I zoomed left and right, rose and fell in total control.

This could become addictive.

The pilot asked if I was up for some high-speed stunts.

What a dumb question.  Lay it on me, bud.

With that we went into four or five fast spins before levelling out and making the gentlest of landings.

All I can say is if you get the chance to do this, take it. Ride with it and discover just how alive you can really be.

After the adrenalin rush of flying a paraglider, the drive back to Dunedin was no anti-climax. The autumn colours set fire to the hills, valleys and gorges. 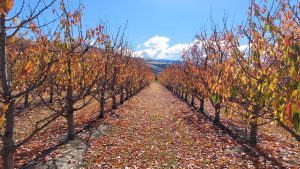 First it was back along the Kawarau Gorge road to Cromwell.  Couldn’t resist a stop at Webb’s Orchard to pack a bag of locally grown apples. The apple orchard was aflame with autumn finery.

Cromwell was a township born of gold and like most mining towns it had a turbulent early history.

The first mayor was a man named Capt. Jackson Barry who arrived and opened the second butcher’s shop on the goldfields, much to the approval of the miners who had hitherto been charged sky-high prices by a monopoly butcher.

Their approbation was such that they elected Barry as mayor.

He was hardly a shining example of democracy in action.  On one occasion while he was in Dunedin the councilors took the opportunity to move a vote of no confidence in him. He arrived back, called a council meeting, locked the doors and demanded to know who moved the motion.

When the mover ‘fessed up Jackson flattened him with one blow. He then demanded to know who the seconder was but by then the seconder had seen enough and slipped out an open window.

When no-one admitted to seconding the motion, Barry declared it lapsed for want of a seconder.

He may have been a bit overbearing to say the least but it didn’t dent his popularity and he was re-elected three times. 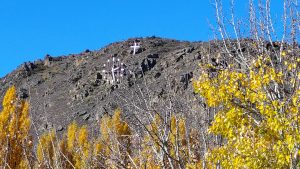 The hillside clock in Alexandra

In Alexandra there’ s something of a curiosity . . .  a clock on the hillside. 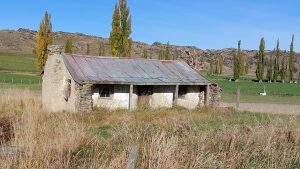 On Lovells Flat, 13km south of Alexandra it’s worth a stop for a photo of the old sod cottage, a memory of how the early colonists lived.

My particular interest on this trip was to visit Gabriel’s Gully, on the outskirts of Lawrence.

Australian Thomas Gabriel Read was the son of a merchant banker and was well educated, particularly in the Classics and English literature. He also had a restless disposition and first sought his fortune, unsuccessfully, on the Californian goldfields before returning to the Victorian goldfields.

As a deeply religious man he was dismayed at the actions of the squatters and disgusted by the violence and excesses on the fields there so when he heard about finds in Southland  he set off for New Zealand.

Hearing of a find by a man called Edward Peters, aka Black Peter, a half-caste Indian from Mumbai, he set off for the hills of and gullies of the Tuapeka area.

Having made a strike and satisfied himself that the  deposit was rich indeed, he wrote a remarkable letter to the Otago Witness newspaper  – “gold ‘shining like the stars in Orion on a dark frosty night” he said –  giving locations and prospects and holding back nothing, instead taking his chances with a pick and shovel along with other miners.

He was also interested in collecting the £500 reward offered by the Provincial Council for a successful gold find which a grateful council actually doubled.

Upright and altruistic, almost to a fault, he did all he could to preserve a form of order on the diggings. He frequently adjudicated in disputes and at all times displayed the greatest concern for the miners. 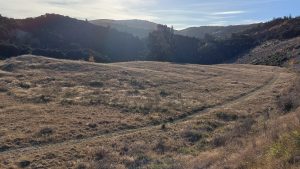 Imagine thousands of miners in this area, each with their 20m by 20m claim, each hoping to make that big strike that would set them up for life. It’s a sad fact that while many of them did make a good living it got blown away on gambling, drinking and whoring.

The field is easily reached up a short road off the main highway. Well worthy the diversion.  Information boards give you a great insight to the life and (hard) times on the goldfield before you.

From Lawrence it was an easy run back to Dunedin airport to drop off the car and catch my flight home after an exhilarating weekend of adventure and discovery.

« Flying High And Falling To Earth Above Lake Wanaka
Are discount airlines as cheap as they seem? »