Ok, it sounds a bit poncey to be in 1st class.  I sure as hell can’t afford it on an aeroplane, but at my great age I really can’t see me doing the all-in-together-in-one-big-happy-party of a second class carriage.

Besides, the trip cost me 2430 Thai baht to have a compartment all to myself. That’s about $US75.  Why would you not, especially given that it avoids a night‘s accommodation?

So it is that I’m sitting in a well-appointed little room as we rattle and sway through the Thai night.

And that’s about the only drawback to this train . . . it’s night-time and there’s not a lot to see out there in the pitch dark.

But I have a plan so cunning, as Blackadder put it, that you could pin a tail on it and call it a weasel. I’ll go by night one way and the day train the other.

Yeah, right! Maybe not so much, as it will be seen.

So let me, therefore, dear reader, regale you with the detail of the first of these overland adventures.

Just as well I got in early in the day and made a booking.  The Friday night train to Chiang Mai is kinda crowded. Tourists, a large portion yes, but also a lot of Thais going to enjoy one of the gems of their country.

I got the last available 1st class compartment.  Indeed, to get it I had to make a fast foray out to the station itself because all the booking sites said “No can do” tonight.

No problem finding the train on Platform 4.  I can count that high.

The very helpful/efficient young woman at the first carriage I come to (the last one on the train) gestures for me to climb aboard and make myself at her place.  In fact, she travels with the train to journey’s end and helps with any small requests, like when I asked for an extra pillow.

Shows you what a halfwit I am.  Had I looked closer in the cabin there were a couple of extra pillows for the taking.  She probably thought “Stupid foreigner”.

In which case she was quite correct.

It gave me a sense of just how big Bangkok really is when it takes a bit over an hour just to clear the city.

Early warning for beginning players:  Be wary of the woman who comes around offering you a cup of orange juice. Silly me, I thought it might be on the house.  A kind of welcome-to-our-place sort of thing. 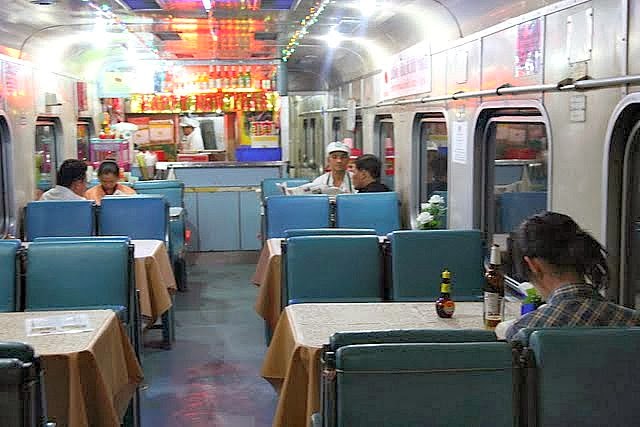 On-board dining options are a bit limited – hey, it’s on a moving train, whaddya expect?  The Orient Express? At 2430TBT?

But I managed a perfectly adequate spicy shrimp and noodles for about $US9.

The same lady that brought the orange juice will also deliver meals to your cabin.

After dinner what else?  Well, ectually, not much. By the time I got back to my compartment the young woman I spoke of earlier had set up the bed. So, in the absence of any further business, I guess it’s into the PJs and settle in for the night. 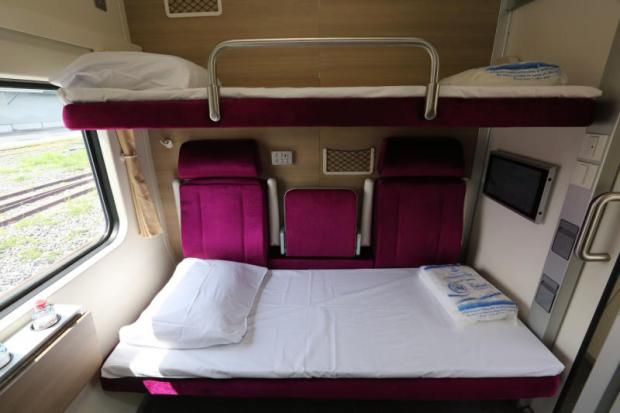 Is it because the swaying of a train takes us back to the earliest of years when our mother rocked us in a cradle? I dunno, but it certainly has the same effect as 10mg of Zopiclone.  Gone to gone in no time.

At 6am comes the dreaded announcement. “Wakey, wakey, rise and shine. Feet upon the cold, cold deck”.

Alright, that’s not what was actually said, but it had much the same import. 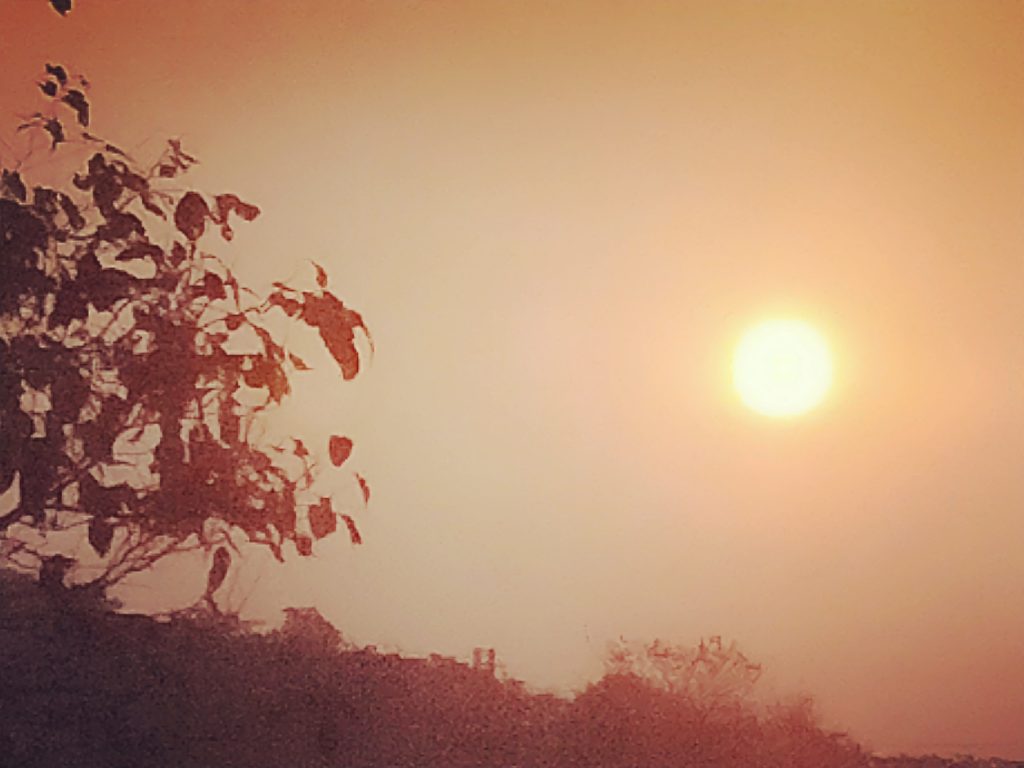 Which was heralded by a glowing red orb of the sun lifting itself sluggishly above the horizon.

Lovely to look at, but not when you think about why it’s so deliciously red. It’s called pollution.  Of which there is an abundance here. 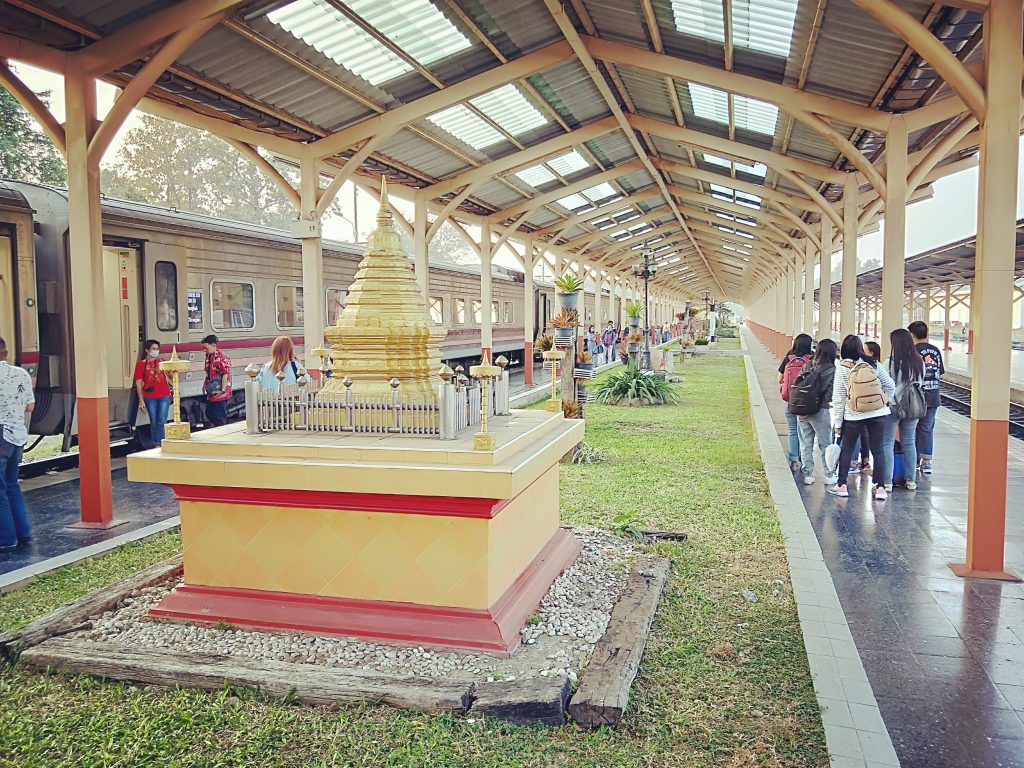 Sweep past the phalanx of taxi touts and find myself a tuk-tuk driver who, for the princely sum of 150TBT, will whisk me off to my pre-appointed abode, the White House Boutique Hotel and Spa. 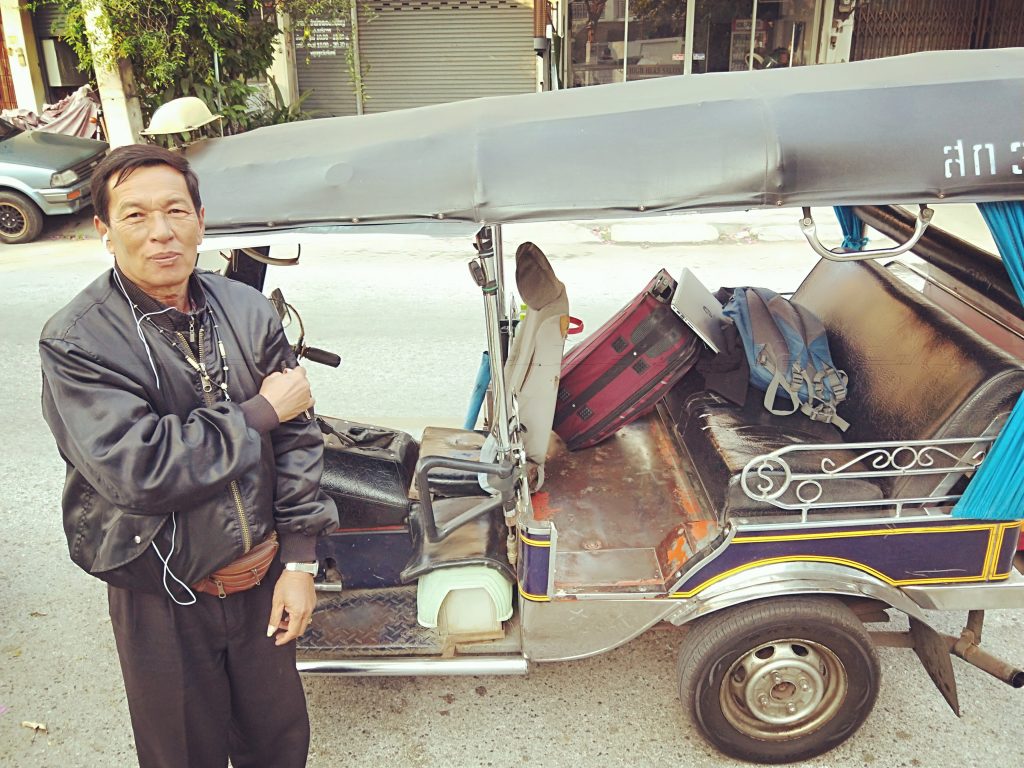 My ever so helpful tuk-tuk driver

All of said description of the hotel being perfectly true, but to which I would add “an oasis”. A lovely colonial-era style building with everything the travel-ravaged adventurer could ask for. Elegant, stylish, quiet . . . except around 5pm when the monks at the local temple give a loudspeaker-broadcast sermon to all who can’t avoid hearing it.

So now I can sit by the pool, accompanied by a bottle of fairly ordinaire “champagne”. (Hey, at $US30 what did you expect?  Dom?)

Life don’t get much better than this. 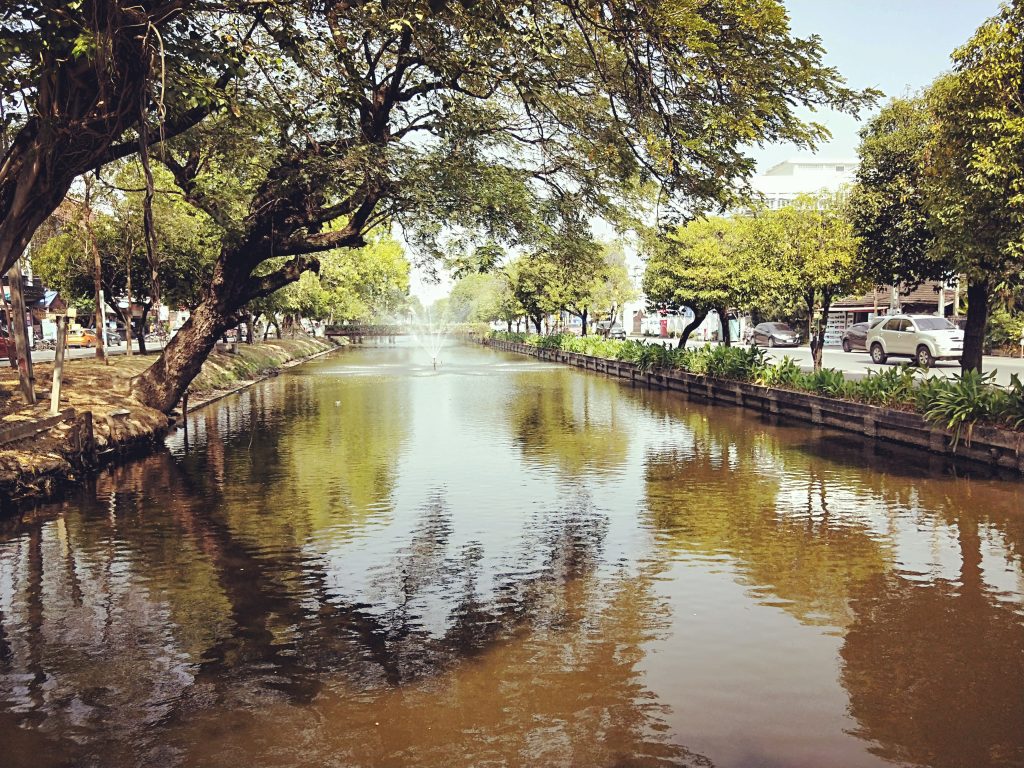 Fountain in the canal that surrounds the Old City

I like Chiang Mai. Put it this way:  I was booked here for two nights but opted to stay a third.

My hotel was only a short stroll from the Old City with its labyrinth of lanes, restaurants and bars side by side, the usual gaggle of market stalls selling all the usual suspects.

But there was a special find – a second-hand bookstore run by a rather eccentric Irishman. When I asked what part of Ireland he came from he replied “Wexford, and I couldn’t bloody get out fast enough”

Row upon terraced row of shelves lined with books.  What a treasure. A friend of mine has been nagging me to read Conversations With God by Donald Neale Walsch so I asked after a couple of volumes from the trilogy.

Snap. Not a problem. 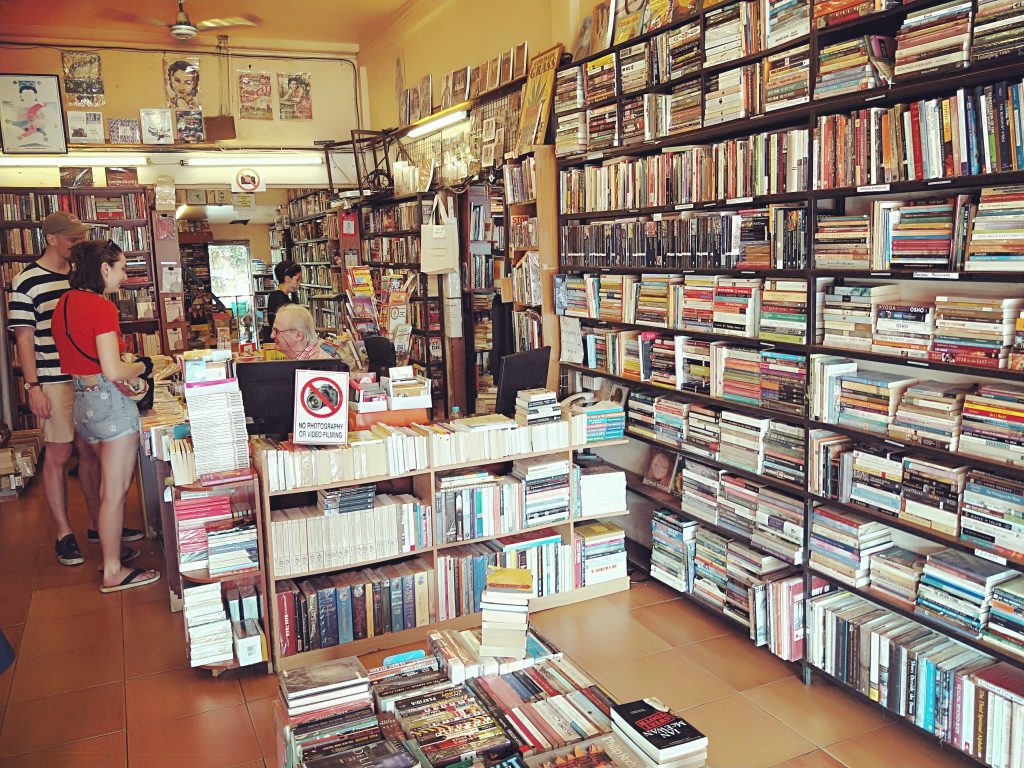 What a treasure trove.

(Walsch really does think God talks to him.  Usually some nice men in white coats help people like that, but he is interesting, confronting, entertaining. And who am I to be a cynical unbeliever?).

Dinner the first night was at something of a cultural anomaly, a “Paris Restaurant” in the middle of a Thai market. Could have had French food but, despite what the sign says, this isn’t France and I shouldn’t dine on cuisine a l’France. The Thai dish I had was exquisite. 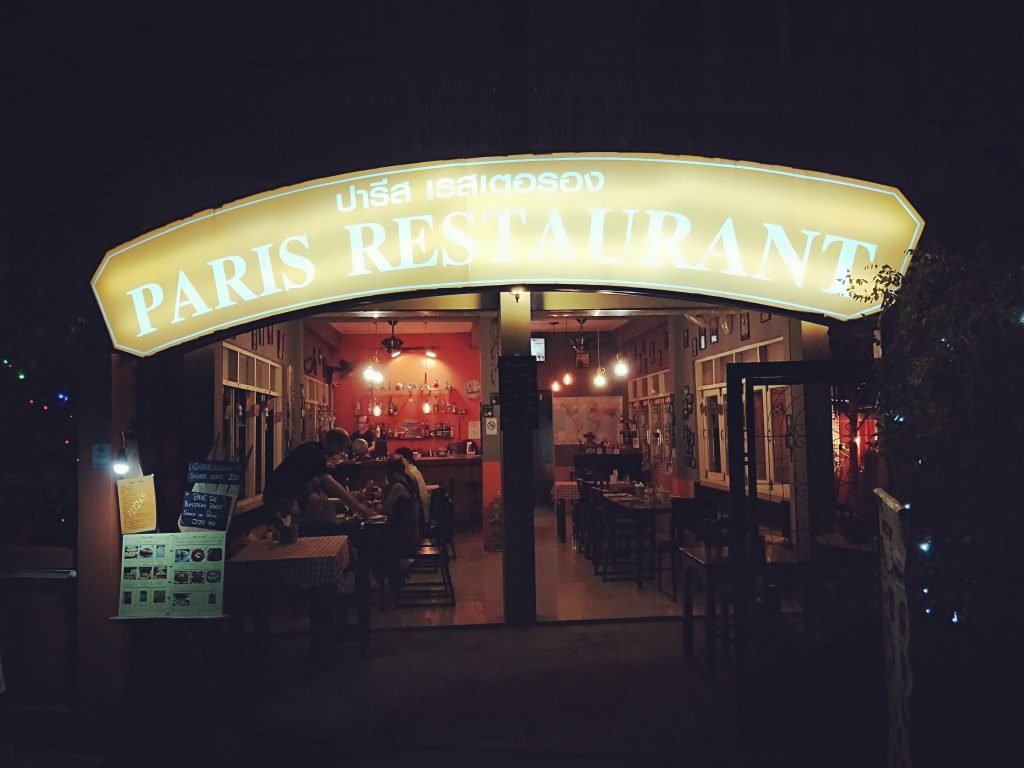 Took the obligatory Elephant sanctuary tour.  Tried very hard to pick an ethical operation, but who knows? One thing that did give me heart was a tender moment between elephant and mahout.  The handler was standing quite close to the animal which, gently it seemed, curled her trunk around him in a sort of elephantine hug. 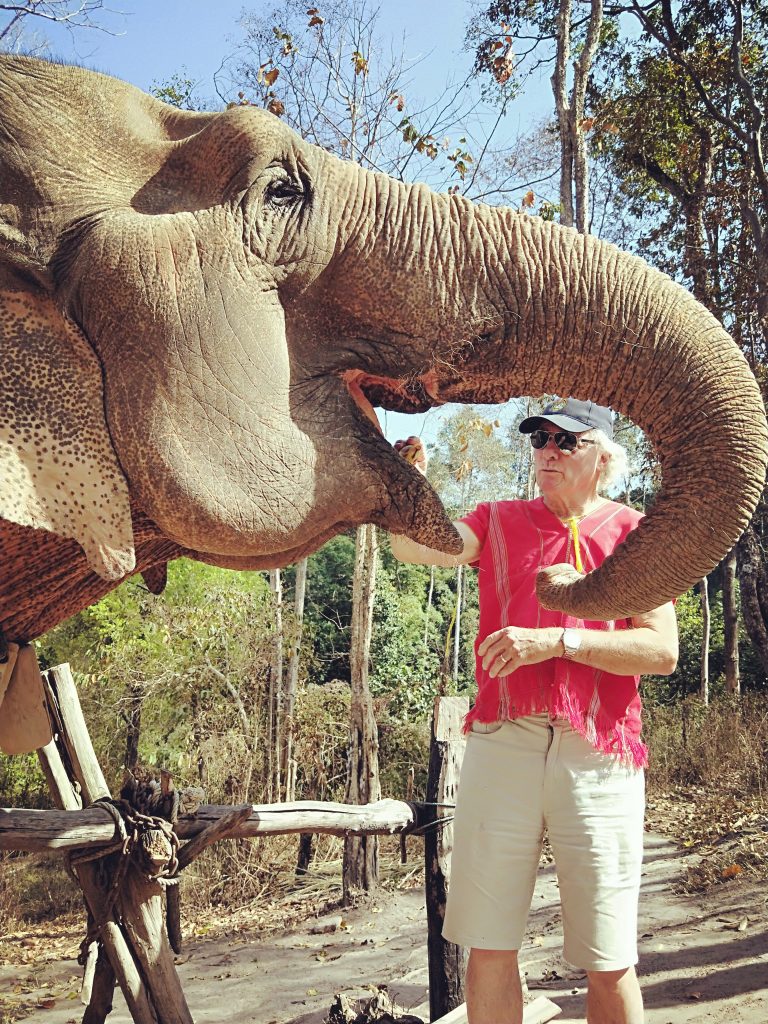 Feeding bananas to my pachydermous friend

Wandered through a night market and bought myself a long white silk staff.  All I need now is a leather helmet and a pair of goggles and I’ll look like Snoopy when next I fly a plane. Had dinner in one of the street food markets where the meal was delectably tasty and the vegetables cooked to within a nanometre of crunchy perfection. Eaten al fresco in what seemed to be a large, dusty park.

Because of my real job running a small business I had to do a certain amount of work each day, but how hard is it to work outside by the pool, laptop on a table, G+T close by? My kind of office. 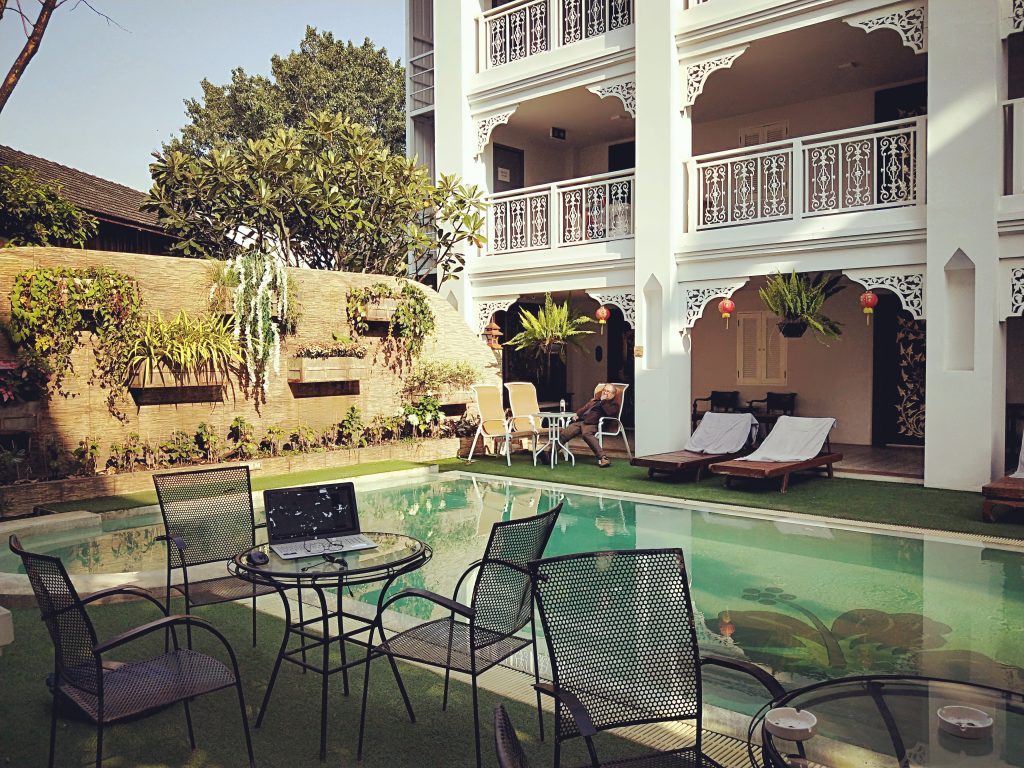 I could have easily spent several more days there, but that’s not how the world works.  I therefore put the second part of my cunning plan into action – a day train trip on the Chiang Mai to Bangkok Express.

That did not go so well.

On the return journey

Eke. That’s the word that comes to mind when visiting much of Thailand. Many, many of the people just eke out a living. They are just getting by. They’ll never be rich. They’ll never travel. But then most of the rest of the world isn’t exactly doing a lot of travelling right now.

I’m on the day train from Chiang Mai back to Bangkok and the idleness of it gives me time to observe the world as it rocks on by.

There’s a fascinating contrast with lives of those strugglers . . . the temples are well provided for.  Their buildings are lavish, palatial even, and while monks profess poverty you never see a haggard, undernourished priest.

Then again, look at pastors, priests and prelates anywhere in the world.  They all look fairly well “cared for”.

To that end I had an interesting exchange with a Buddhist priest who was my sit-beside companion for part of the trip.

At one stage I asked him why he became a monk. His reply? “Because it is a very good life.”

Almost as an afterthought he added “Oh, and I wanted to serve Buddha”.

Rolling south from Chiang Mai we lurched our way across wide open plains carpeted by rice paddies, then plunged into steep hill country riven by deeply cut valleys.  The railway picked its way precariously along slopes that dived off into deep gorges. The hill country was dotted here and there with houses, some quite well appointed, some just rough shacks.  Some huddled together in small villages. 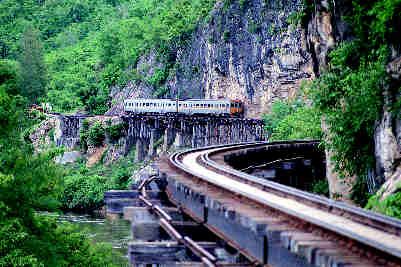 All around is the lush jungle.  There is the occasional paddy field, at this time of year dry, brown, burned off and waiting for the rainy season to bring it back to life.

Half way through the journey and we are back out on open plains, in many places patch-worked by  serried rows of market gardens, all lush and green, growing various sorts of crops.

At each of the railway stations we rattle through there is a man in a military-style uniform holding up a green flag, and one has to wonder why, other than keeping him occupied with make-work.

Our next stop was at Silat.  As always there are the military-type men everywhere.  It seems that three pips on the shoulder is the lowest of ranks.

Thai officials seem very fond of the military look. Even those just controlling traffic flows in and out of parking areas look as though they’ve just come in from a high level strategy meeting, their No 1s neatly pressed, small touches of gold braid giving them that “look”.

Got served a lunch of boiled chicken in turmeric. Never did like boiled chicken.  There was also a fish dish of some sort, but I gave that back.  The soup from the chicken, poured into an accompanying bowl of rice made a filling meal, but I gave the rubber chicken a “Yeah, nah”.

Note to self:  In the unlikely event that I ever travel by day train in Thailand remind me to bring my own meals.

Rolling on, there must be a plentiful supply of water in some areas because the rice fields here were flush and lush. Each one of them was a clever piece of hydrological engineering, damming the water but allowing it to cascade down, adjusting for the changes in topography.

After a while the sameness of it begins to pall and I settle down to try to sleep, to no effect.

Afternoon tea (I suppose you could call it that) was a pleasant-tasting pastry and a cup of coffee not enhanced by that dreadful powdered dairy whitener, but still welcome.

We clatter on into dusk and night.

This train was supposed to arrive at 6pm. It finally lumbered into Bangkok station a tad after eight. I passed a remark to my seat-buddy about trains not running on time.  He laughed. This is early . . . usually they are much later.

Hence my suggestion. By all means take the night train Bangkok to Chiang Mai . . . but catch a flight back.