Day three of my Central Otago road trip did not start well. Raining. Not exactly ideal for the first planned activity of the day, tandem paragliding.

Although the sun broke through, the winds on nearby Coronet Peak were too strong. Another day perhaps.

Instead it was off to Wanaka, a summer and winter resort town that gazes out north over the eponymous lake to a range of mountains in every shade of blue.

Compared to the Wakatipu region further south, centred on  Queenstown, this region has softer, more rounded landforms.  Here the ancient glaciers have done their work well, yielding a smoother, gentler landscape, contorted only occasionally where harder rocks have held out against the massive grinding forces of the ice. Iconic Mt Aspiring is a good example or this hard rock resistance.

As elsewhere in Central Otago, the poplars and willows that line the lake’s edge render autumn a colourful  time. 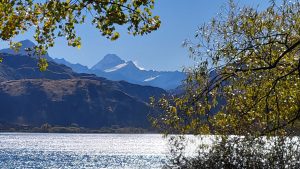 Given that this is that “colourful time” it was off around to Glendhu Bay, about 10km west of the township  from whence some of the iconic Wanaka images have come. A motor camp stretches along the bay and not surprisingly it was chocker with camper vans and tents.

Another famous Wanaka image is the vineyard at Rippon Wines. My shot is not quite up to the best of them, but it’s close enough. 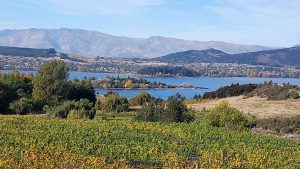 My digs for tonight and the next were at Wanaka Stonehouse, a BnB I found on Booking.com. BnBs are not normally my gaff of choice, in fact this is probably the first time I have stayed in one for years. I’m just a bit uncomfortable living in someone else’s house, preferring the anonymity and privacy of a hotel or motel.

Shouldn’t have worried, Hosts Alan and Noeline made me feel right at home with their congenial, relaxed manner.

Having over-indulged the night before at The Cow in Queenstown – I really should have left the last two or three pieces of that pizza but it was just soooo good – I went looking for something much lighter and found it at Gusto, a Chinese restaurant.

It was packed – always a good sign – but after all the downtime through Covid lockdowns I suspect the management was taken by surprise staffing-wise. The poor woman on the desk was handling phone orders in between racing between tables, meals in hand, when she wasn’t clearing away dishes. She made the famous one-armed paperhanger look slow.

Although it took a while it the food was worth wait. A vegetable soup chocker with still-crisp veges followed by black pepper beef stir fry, I’m sure my gut biome appreciated the change.

Back to the BnB and a good night’s sleep on a very comfortable bed.