First item on today’s agenda is some flight-seeing around the region, but given that I was going to be in a light aircraft I might as well log some instruction time. I have flown a Cessna 172 before, but not in a while so my instructor from Learn To Fly NZ, kept a watchful eye.

Take off good, climb to 4500 feet then just drone around this achingly beautiful landscape. What an experience . . . not just soaking in the view but flying the plane as well.

Landing not so good. Not bad – just came in a bit low and had to wrap on a bit of power in the last few seconds.  But as the old pilots say ”Any landing you walk away from is a good landing”. 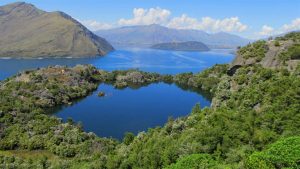 The weather wasn’t as co-operative as it might have been. Misty-ish. But it didn’t really detract from the scenery . . . but then, there’s nothing I can think of, short of 10/10ths cloud that could short-sell this part of the world. 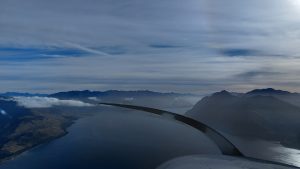 4,500ft Above Lake Wanaka. Not the clearest of weather, sadly.

An hour or so later, however, the weather was totally in my corner when I tumbled out of an aeroplane in a tandem parachute jump with Skydive Wanaka.

I have wanted to do this for a long time but it had to be in a landscape like this. No point in jumping out into a boring world below.

No, I wasn’t really “scared”. In the hangar, as we suited up, a little apprehensive, perhaps.  But the total professionalism of Eddie, my jump buddy, settled any nerves very quickly. He was just so cool and reassuring.

No wonder.  He’s done this literally thousands of times. All the way through there was this calm, confident voice behind me, talking me through the process. Checking.  Then checking again.  Then again.  And once more, just to be sure.

As we climb through 9000ft, and again at 12,000ft some of the other jumpers in the aeroplane went out and away.

Then at 15,000ft it’s my turn.  We shuffle forward on the seat to the open door and it’s out into space.

It takes a bit under a minute of freefall from this height. Nearly minute to marvel at the beauty of the world below as you hurtle towards it.

Only drawback: It’s bloody freezing.  When I do this next time – yes, there will be a next time – I’ll have gloves on and a woolly scarf. 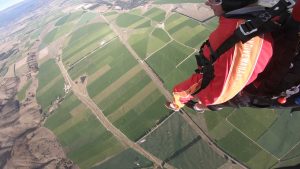 Floating to earth above the Wanaka landscape

Suddenly there a snap and a yank as the chute deploys. Very reassuring.  From here on it should be a breeze. A freeze of a breeze, admittedly.

Now you float gently. with only a hint of wind-sound, marvelling at the landscape below. A wonderful contrast of wild mountains and manicured flats, cradled between lines of hills.

Having been kind to my gut biome the night before I figured I could risk a bit of cholesterol and ordered a Chicken Parmigiana, washed down with a local Rabbit Ranch Pinot Noir, at the Water Bar, on the water front with a view out over the lake.