Ever felt you’d like to drive some real Big Boys’ Toys like a bulldozer, a front-end loader or a digger?  Just for the fun of it? Then take a road trip to Invercargill in New Zealand’s deep south.

At Dig This Invercargill you can have a go at feeling like a superhero in a 4 tonne front-end loader, stacking up to 20 tonnes of tyres.

Or dig a whole lot of dirt in the king of the gravel pit. Dump, dig and push your way around in a five-tonne digger. Guide your hulking piece of machinery through delicate twirls and spins that would seem at home in a ballet performance. Operate five tonnes of sheer power, in a machine that can master the most gentle of manoeuvres. 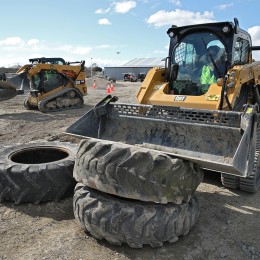 Stack up tyres with a front-end loader.

And if five tonnes isn’t enough heavy metal for you, have a go with a mega-monster, the 15 tonne version

But for the ultimate agro-kick, how about crushing a car? You can even tailor your experience: Grab a can of spray paint and unleash your inner  street artist before getting behind the controls of a digger and performing the last rites on a clapped out old banger. Be assured, there’s nothing more satisfying than hearing the crunch of disintegrating metal. 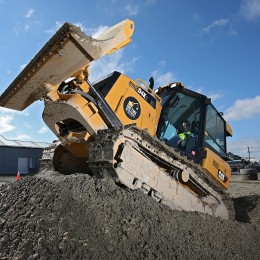 Drive your own bulldozer.

Did you love making sandcastles as a kid? I did . . . see below. What about smashing them afterwards? This is the experience for you. You won’t find any seashells here, but you will get to ram a heap of dirt into a giant mound before making your way to the top and back for extra thrills.

When I was a kid I wanted a toy bulldozer so that I could play in the sand around our beach house.  Despite the sound of being rich enough to own a beach house (it was just a shack at the end of a rough-hewn road into the sand-hills at Foxton Beach, New Zealand), we weren’t rich enough afford an expensive toy like that.

I got over it.

But next time I’m down Invercargill way I’m up for a go at the real thing.