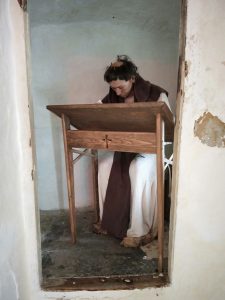 A monk sits in his cell at Hook Lighthouse, County Wexford, Ireland.

It’s the second oldest still-operating lighthouse in the world and you can get a guided tour, climbing the 115 steps to the top.

It marks the entrance to Waterford Harbour and has done so for nearly 900 years. 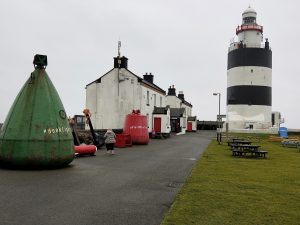 In the 13th century the then Lord of Leinster established a harbour 30km up the River Barrow but the entrance to the river was a rocky headland, a graveyard for ships so he had a 36m high tower built.

There was a small monastery on the peninsular and the monks were given the task of keeping a beacon fire burning to warn mariners of the imminent danger.

The monks who originally manned it are long gone, though this one sits there as a reminder to visitors of its ancient days.

It has operated continuously since, though today the light is electric and the lighthouse itself is on automatic.

Lifeguard equipment the way it used to be.

I just loved the Coast Lifesaving Service equipment on display in the visitors’ centre. Not exactly like the IRBs that today’s volunteer lifeguards  use, roaring into the breakers to save lives.

It was all part of a round-Ireland road trip we did a couple of years ago.

It all seems to far away from our locked-down, can’t travel anywhere life at the moment.

« Parlez-vous Francais? Non? You could have been reading this in French
Blarney Castle – all blarney for sure »