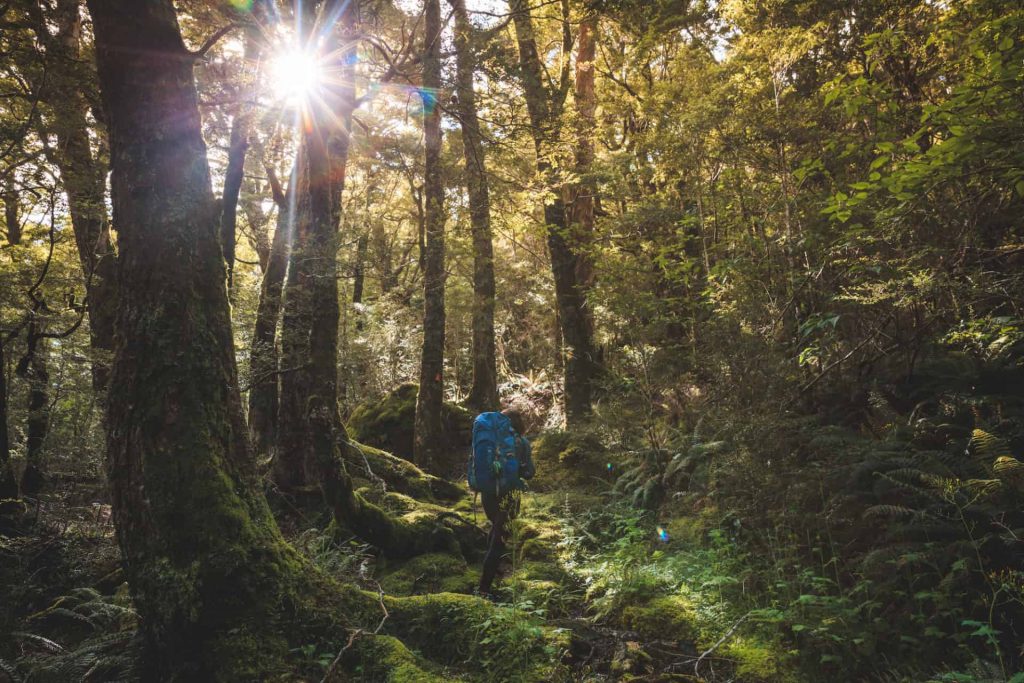 A post in the last couple of days by YoungAdventuress, telling how she was rescued after an accident in the New Zealand bush, brought to mind an article on outdoor survival  I wrote a few years back.

Reading through it again, I thought it was well worth posting. It is written about survival in the New Zealand bush and mountains, but the advice is universal. It’s real easy to die anywhere in the wild.

Before I do, however, YoungAdventureress, aka Liz Carlson, tells her accident and rescue story at

It’s well worth a read. The picture is from her post.

The beautiful New Zealand outdoors is a merciless killer!

Not long ago we had a couple of tourists die in the bush within weeks of each other. They are tragedies that just didn’t need to occur. One was a young Polish guy who got trapped by rising floodwaters in a bush stream. The other was an Israeli girl who strayed off a well-marked commercial track.

Many visitors come to New Zealand with trekking (in this country it’s called tramping) high on their list of must-dos.  They want to experience the pristine wilderness that has disappeared or been desecrated in so much of the rest of the world.

What they don’t realise is that the NZ bush is an unforgiving mistress. And like a lot of mistresses, beautiful but dangerous. It is real easy to die out there . . . and every year many do.  Some of them are experienced hunters and trampers, which just goes to show that even years of  experience don’t always save your hide.

If professional soldiers die how do you rate your chances?

In 1990, for instance, a troop of professional soldiers were trapped in adverse conditions on Mt Ruapehu in Tongariro National Park. Despite the fact that the party included experienced army instructors, five young men died from hypothermia in a storm that lasted for a couple of days

What chance, then, a kid who had hardly ever been out of a big city?  Better than you think if you follow the rules of survival: Be prepared, don’t take risks.

At the same time, in the same Ruapehu storm, was a young Japanese guy who set out to climb to the summit of the mountain. When the blizzard came in he dug a snow cave and stayed in it until the storm had blown itself out.  The mountain rescue team that headed uphill to get him presumed this was a recovery not a rescue.  Instead they saw a little black speck, high up on the mountain, making its way down towards them.  He survived where the solders died because he did what he had been told. He dug a snow cave and stayed in it.

The soldiers did the same but then decided that only a couple of hundred metres away was a nice, warm, dry hut with food. They decided to make for it. Instead, tragically, they perished.

Here are some simple precautions that an adventurer can take that will make the difference between life and a lonely death.

Rule 1:  Give the outdoors the respect they are due.  It is not a big Disney theme park out there. Choose a trip in keeping with your experience and ability,  Preferably go with other people, preferably those with more experience than yourself. Be conservative in assessing your abilities. If you’ve never done a lot of trekking don’t start by taking on a three or four day track through rough terrain. Indeed, limit yourself to no more than a half or full day walk.

Rule 2: Plan and prepare. Know where you are going.  Get information on the terrain and likely weather.  If you are in a Department of Conservation (DoC) area – national park, reserve etc – talk to the local rangers. Talk to hostel managers. Go to the MetService website  http://www.metservice.co.nz  for up-to-date forecasts . . . and believe what they tell you.  In other words don’t go in blind. It might look easy on a map, but when the weather turns foul and the terrain is rough you are in the red zone.  The New Zealand Mountain Safety Council (MSC) has an excellent triplanner on its website. www.mountainsafety.org.nz  Explore the DoC website http://www.doc.govt.nz – it’s an absolute goldmine of information and advice.

Rule 3:  Tell someone where you are going and what time you will be back.  Tell the hostel manager, the park rangers, the police, a friend. Who cares, just tell someone who’ll respond if you fail to turn up. Tell them you will check in with them when you return.  That way if you don’t check in they’ll raise the alarm.  Deaths occur because it is a day or two before anyone notices you are missing.  Sometimes even longer.  DoC  headquarters and huts have log books for you to record your intentions.  Use them.  And above all else, for god’s sake, when you end your trip, do log out.  Search and Rescue in this country is done mostly by volunteers. They get called out, often in atrocious conditions, they leave their work or business, leave their family and responsibilities and head into the mountains and bush to look for you.  They can be there for a couple of days before it is realised that you are sitting with your feet in front of a fire many miles away. Believe me, they will not be amused. The Mountain Safety Council website makes it easy to record out-in information.

Rule 4:  Be prepared, mentally and physically, for bad weather.  It doesn’t matter if you are only going for a one hour walk, be prepared to spend a night or two in the open. You have no idea how easy it is to get off a bush track and not be able to find it again. It’s late afternoon by now, night is closing in and with it can come freezing rain and wind. Hello hypothermia, goodbye world. The weather right through this country is very changeable.  A stroll in the sun this morning can end up a hard, head down slog in driving wind and rain.

Rule 5:  Take appropriate clothing. DO NOT, REPEAT DO NOT, go wandering off wearing nothing but shorts, a t-shirt and sandals. If you do you are already in the death zone! What you take will depend on the adventure you are planning.  If it’s a half day trip, at least carry a waterproof parka and a warm jersey (sweater).  If you are staying out overnight you’ll need to plan for really foul weather . . . overtrousers, gloves, hat, longjohns, t-shirts as singlets, sturdy boots, 2 or 3 pairs of warm socks.  Wrap the woolies in plastic bags to keep them dry. Your pack should have a plastic liner to keep stuff dry.

Rule 6:  Take the right equipment.  If you carry only one thing, make it a whistle.  Don’t go into the bush without it. Why?  If you get lost you’ll start shouting for help.  Guess how long your voice will hold out?  Not long enough. In a day or two when the searchers are slogging their way through the wind and rain, the mud and the slush and the undergrowth they’ll be calling to you . .  and they won’t hear your feeble, croaky reply.  But they will hear a shrill blast on a whistle. Take matches and firelighters – the sort of lighters used to start a barbecue – or even just a candle. All in a waterproof container. A torch, first aid kit, a survival sheet (buy them at outdoor shops), map and compass. Buy or hire an eperp. It will work where a cellphone won’t. All this gear amounts to no more than a kilo in weight. You can carry it easily in a day pack, yet it is the difference between life and death. You can buy a survival pack at outdoor shops.

Rule 7:  Take food for two or three days longer than you expect. Even on a short hike you should have a heapin’ helpin’ of chocolate bars, muesli bars, biscuits, scroggin (nuts and dried fruit mixture). Maybe some dried soup.  There is nothing better, when you are feeling lost and miserable, than to be able to start a fire and boil up a mug of instant soup. Oh, yes, you’ll need to take a mug and a billy. Tea, coffee, sugar, sachets of powered milk. Maybe something like cheese, salami –  the fat content is high value energy.

If nothing else, these precautions allow you to stay warm and dry and reasonably well fed.  That will keep your morale high.  People die simply because they give up under the misery of the cold and the hunger.

Let me say again:  The mountains and the rain-forest in New Zealand are beautiful beyond measure, and perilous to match. They are not a kid’s playground, or just “a walk in the park”.

The Boy Scouts’ motto had a lot going for it:  Be prepared.

« 10 Lakeland Views You Just Have To See For Yourself
25 Famous Places You Can Visit Right Now – Without Leaving Home. »