Given the impracticality of overseas travel right now, and therefore the enjoyment of some of the bucket-list road trips – Blue Ridge Parkway or Alaska Highway for instance – I decided to explore one of the backroads at my own backdoor.

So why do it as a road trip? Because it’s a deep dive into the wop-wops.

It’s a Kiwi term meaning well away from whatever passes for civilisation. The back of beyond. Or in Aussie “out the back of the black stump”.

Done as a round trip from Auckland it’s a four or five-hour meander through a rural landscape that encompasses well-groomed lifestyle blocks, small towns and villages, rough hard-scrabble farms, a dramatic coastline, photo-perfect limestone country and even some Maori history on the way home.

So on a day without cloud in the sky I skedaddled down the Southern Motorway from the big smoke and left it at the Drury exit to pick up the northern end of SH22.

Those well-groomed lifestyle blocks on the city’s fringe gave way to a couple of country towns:  Pukekohe, famed for its market gardens, and Tuakau, not famed for much at all.

That’s probably a little unfair. It’s worth taking a short side trip up to the Alexandra Redoubt. Of great strategic importance, it safeguarded Lieutenant-General Duncan Cameron’s right flank on the Waikato River as he advanced into the Waikato during the New Zealand Wars. It protected the British naval fleet that transported troops and provisions for the Waikato campaign, and helped to secure the South Auckland region against Kingite Māori forces.

Worth the trip if only for some great photo ops of the surrounding countryside. 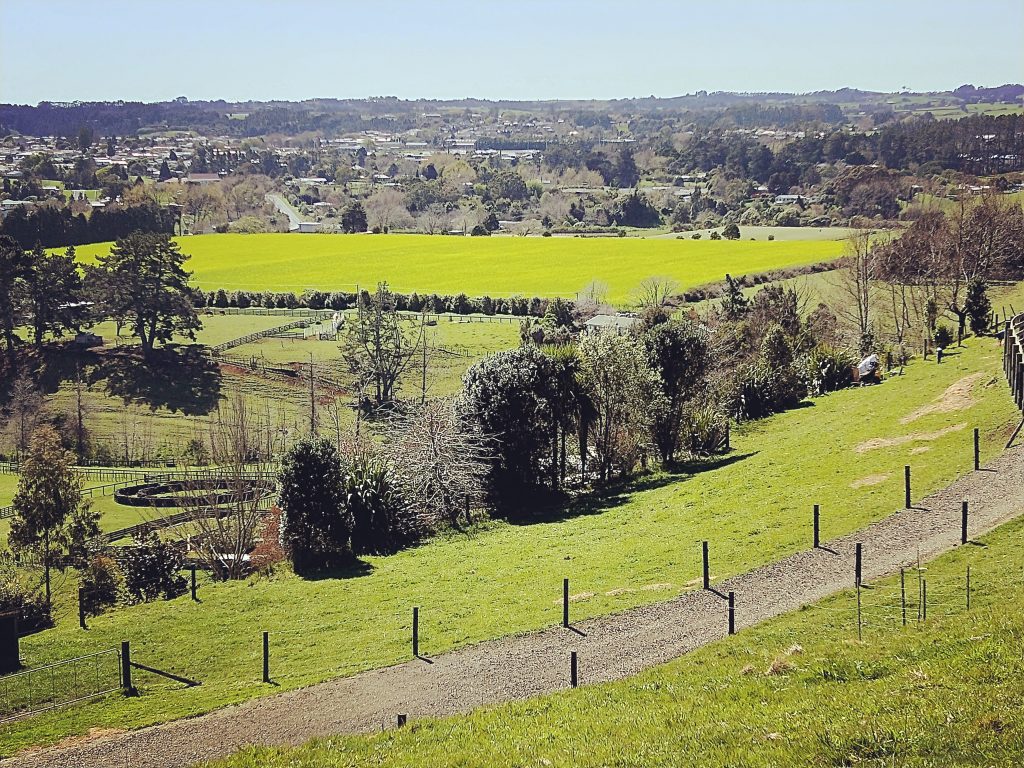 The view from the Alexandra Redoubt, Tuakau.

Rather than follow SH22 all the way, at Tuakau I veered hard a’starbd and headed out to Port Waikato. The landscape gradually changes from well-kept farmland to scrubby, weedy holdings often with semi-derelict houses, not at all enhanced by the scruffy caravans and abandoned cars in the front yard.

At that point I began to think I was on the road to a wasted afternoon.

Calling Port Waikato a port is more than just a bit of a stretch. It is little more than an assemblage of traditional Kiwi baches – vacation homes – dotted with a few better-got-up permanent residences.

The big attraction is Sunset Beach, a long stretch of typical west coast beach curving away into the distant haze, anchored at the town end by a rather splendid rockscape. 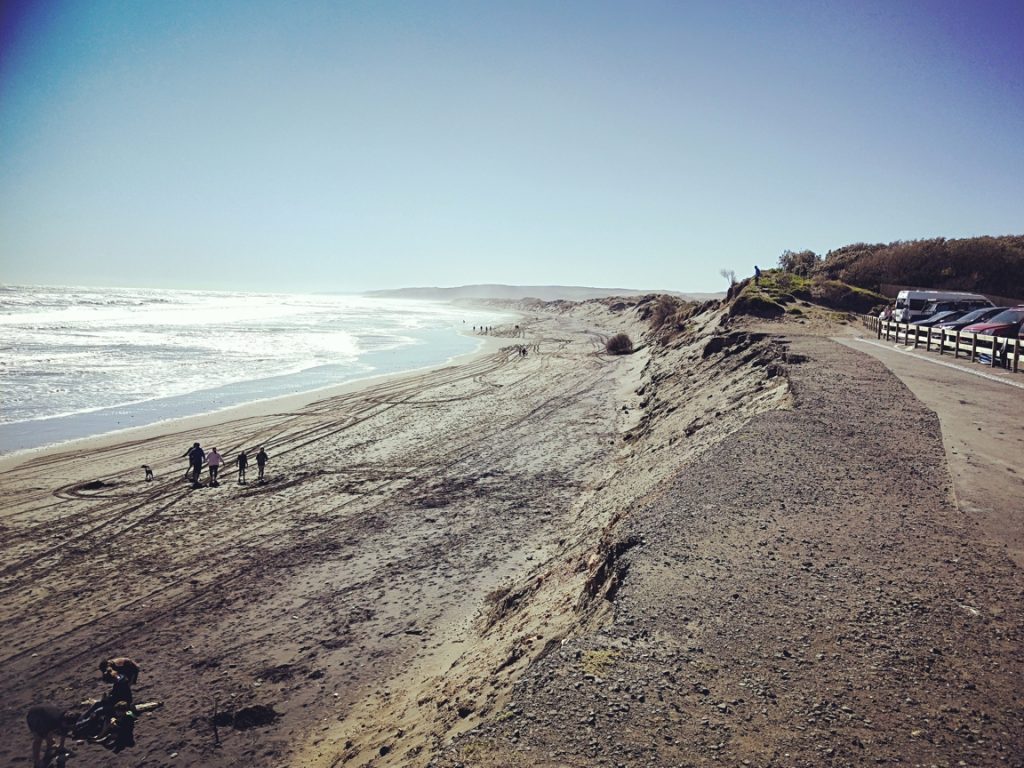 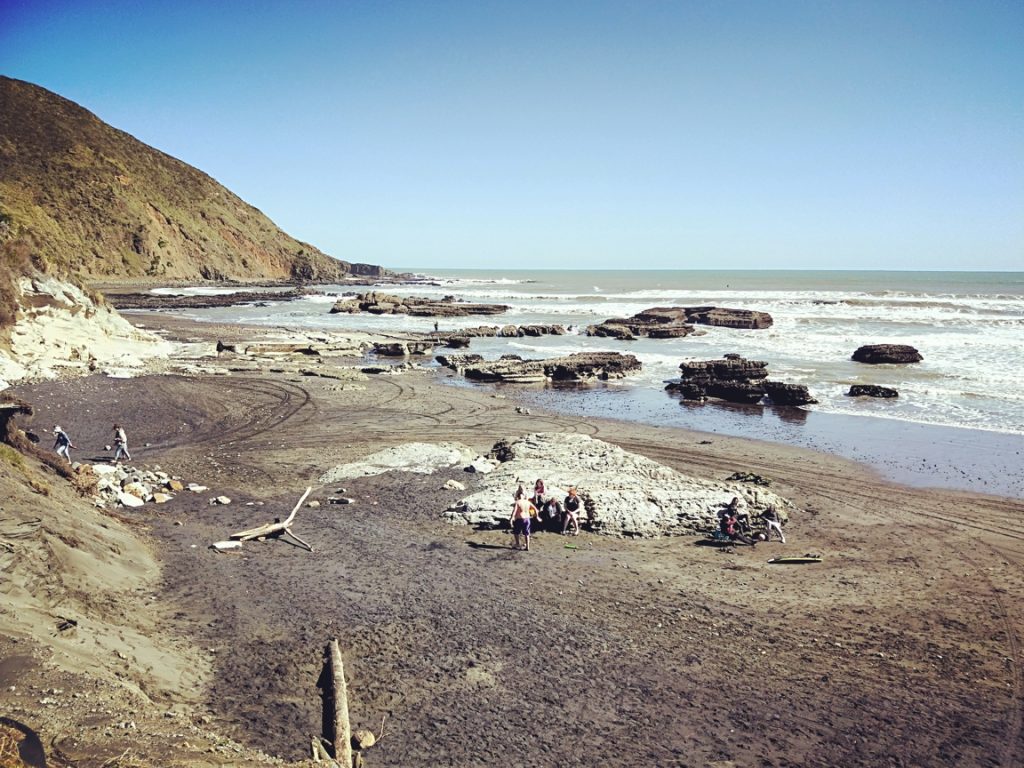 Pulled out of the town, took a right turn to go south on Waikaretu Rd and before long the Old Master Stage Designer swept in a totally new and dramatic backdrop of limestone outcrops that seriously slowed my progress by the constant need to take photos. 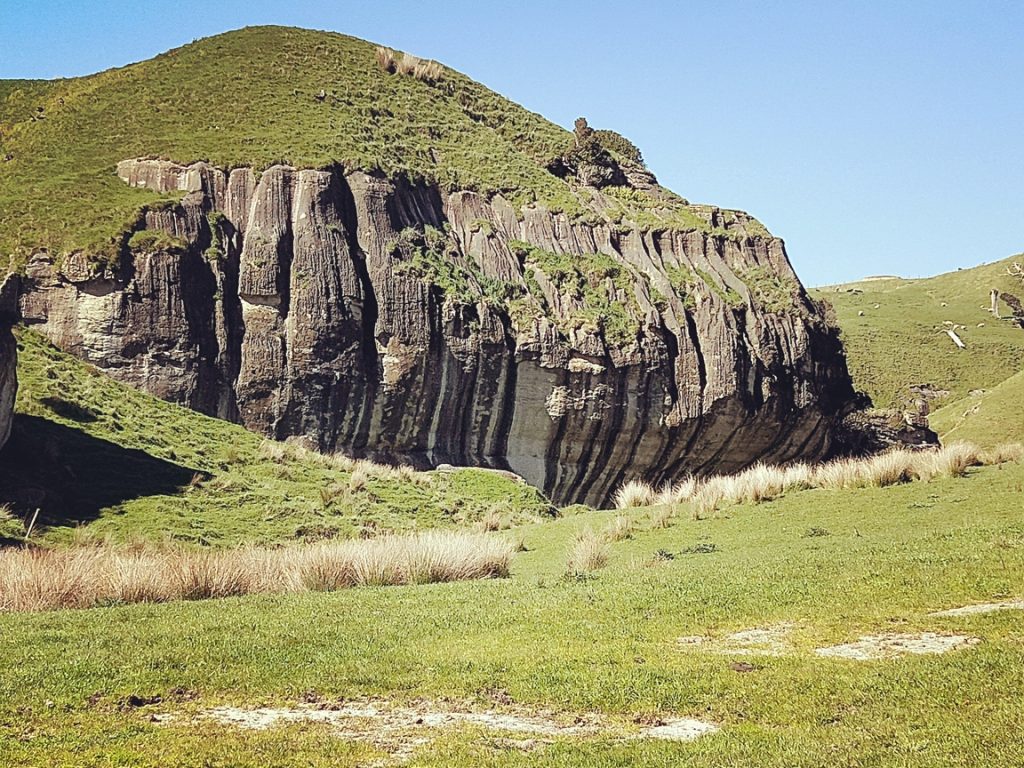 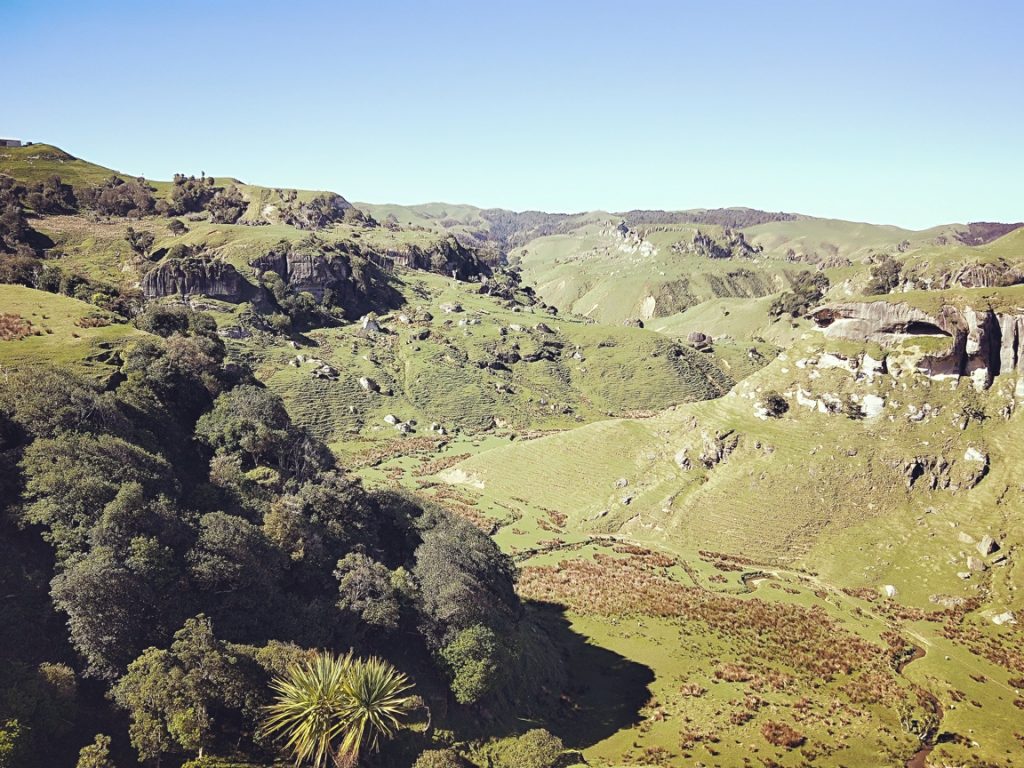 Along this stretch of the trip there are some gravel surfaces to contend with, so have a care and keep the speed down.  Be particularly wary on blind corners.  This is no place to have a crash.

It’s a long haul between drinks on this road and so the café at Waikaretu’s Nikau Cave was a welcome mid-afternoon lunch break.

The cave is reached by a walk through farm and forest and shows off all the usual underground suspects – stalactites, stalagmites and glow-worms. 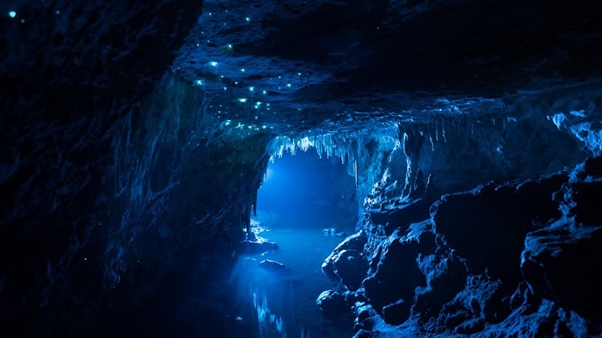 Fortified by a flat white and a slice of shearer’s pie which looked suspiciously like bacon and egg pie and was none the worse that, I turned sort of nor-eastish for the run home, briefly rejoining SH22 through Glen Murray before bearing away eastwards to Rangiriri.

North of Glen Murray, marked only by the existence of Glen Murray Motors, now abandoned, you make your way along a high ridge with wide-screen views on both sides but particularly eastwards across the Waikato plains to the ranges beyond.

These days Rangiriri, on State Highway 1, is bypassed by traffic going at warp-speed.

Apart from the Rangiriri Hotel, a splendid old-fashioned watering hole, and Rangiriri Pies which do a fine line is that particular Kiwi staple, there is the historic Rangiriri Pa site to be explored, and, more importantly, its history studied.

In 1863 British Lieutenant-General Duncan Cameron was advancing his forces southwards into the Waikato in the opening rounds of the New Zealand Wars. The Waikato River was an important transport corridor and its strategic importance was not lost on either side, hence the battles for its control.

Cameron’s men came up against a substantial Maori fortification at Meremere, about 10kms north of Rangiriri.  The Kingitanga forces kept the Brits at bay for three months before a final assault broke what Cameron believed was the last barrier to a successful invasion of the Waikato.

Here, at Rangiriri, however, he was stopped in his tracks by a sight that must have astounded him.  The Maori had used their three months well, building a vast defensive fortress. On the west long lines of trenches ran down to the river, on the east the ridge had been carved into a clever system of trenches and banked-earth parapets. The eastern approaches had been trenched between the fort and Lake Kopuera to protect that flank.

It stopped his advance dead in its tracks.

The pa was a tough nut to crack.  It was a maze of traps and decoys. Parts that looked weak and easily assaulted were, in fact, heavily defended.

At one stage a team of engineers tried to mine the parapets, to blast a breach, but after reaching them at appalling loss of life they found that someone had left the fuses back on the boat.

The Maori had a code of warfare in which victory should go to the best warriors, not just the side with the best logistics. If one side ran out of gunpowder, the other side would resupply them, so the issue could be decided on equal terms.

Other accounts, however, say that the defenders came out under a white flag because they knew that eventually they would be over-run and this was a way of saving lives.

The pa site has been restored and the important works marked out. Well worth the stop, particularly for New Zealanders trying to come to grips with their history. 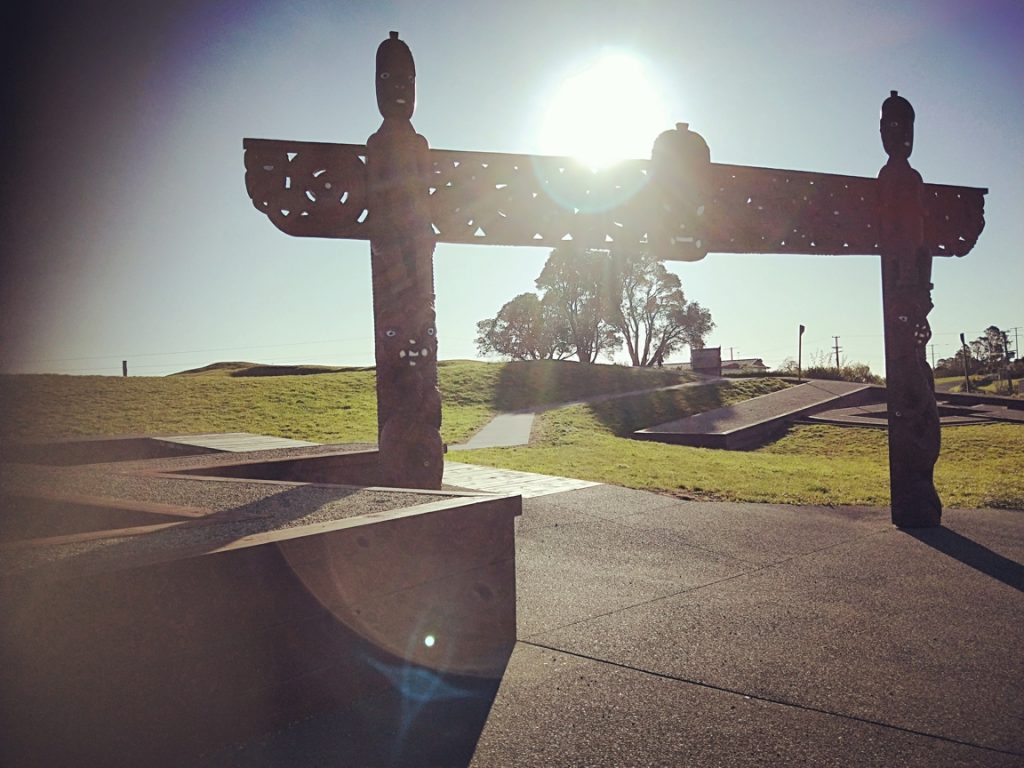 Leaving Rangiriri and reaching SH1, why not take a quick 2km diversion to Te Kauwhata to sample (and buy) wine and gin at Invivo Wines, made famous by tv talkshow host and shareholder Graham Norton and New York icon Sarah Jessica Parker.

From there it’s an easy canter back on the motorway to home and hearth in the Queen City.

Perhaps not one of the “world’s 10 best road trips”, or for that matter not even one of the 10 best New Zealand options, but a thoroughly pleasant way of filling a day that might otherwise be spent at home bleating about how life is so hard without international travel.