No trip to Ireland is complete without a visit to Belfast. For two reasons, both stemming from dark times in its history: The Titanic Belfast and a tour of the Badlands, Shankhill Road and Falls Road, the  frontlines in the worst of The Troubles late last century.

Naturally there are other things to see and do, but these two are a must and between them will account for a full day.  The Titanic Belfast experience is at least a five hour visit. And don’t short sell it on time. Do it all and do it properly or don’t do it at all.

Whoever designed this attraction is a genius. Not just in the brilliant shape of the main building, but in the little things.  The details.

A major piece of advice:  Take the official tour.  You will get so much more out of your visit than if you just wander around aimlessly.

For example you will learn that the height of the exhibition building is exactly the same height as Titanic. 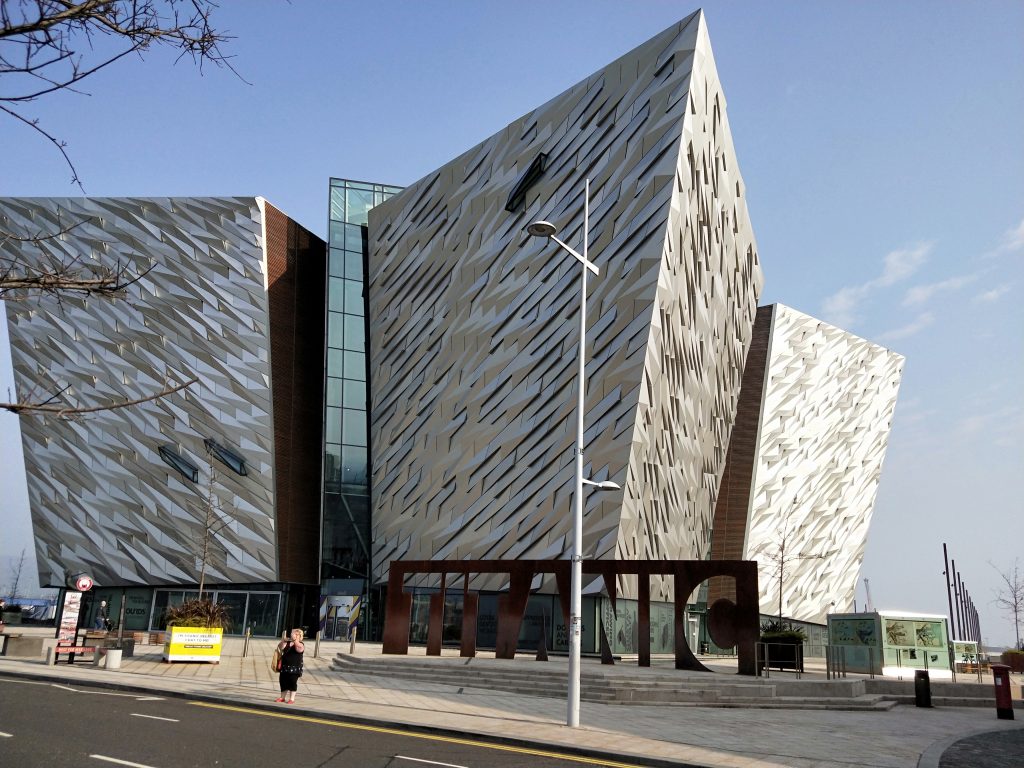 If you look down on the plaza in front of the building from one of its upper floors you can see a line of wooden seats.

Take the tour and discover.

The seats come in two lengths, short and long. You will learn that they are Morse code signals.

They spell out the very last signals sent by the stricken liner as she sank into the icy Atlantic.

In those days the international distress signal was CQD. Today it’s SOS. So the line of seats, as they curve around the front of the building spell out

The signalman remained at his telegraph calling for help until the waters closed around him and cut short that last message.

Take the tour to get the inside story

Miss the official tour and you miss many stories like that. Stories that bring to life not just Ship 401, the Titanic’s construction number, but the vast enterprise that was Harland and Wolff, where 15000 men and women toiled in conditions that wouldn’t be tolerated today to build not just the Titanic but hundreds of other vessels of various sizes and type.

Walk on to the slipways where Ship 401 was taking shape alongside its sister ship, the Olympic. Lines drawn on the slipway mark the dimensions of the hull, steel posts down the length of the slipway reference its height. Walk and be overwhelmed by the magnitude of the enterprise. 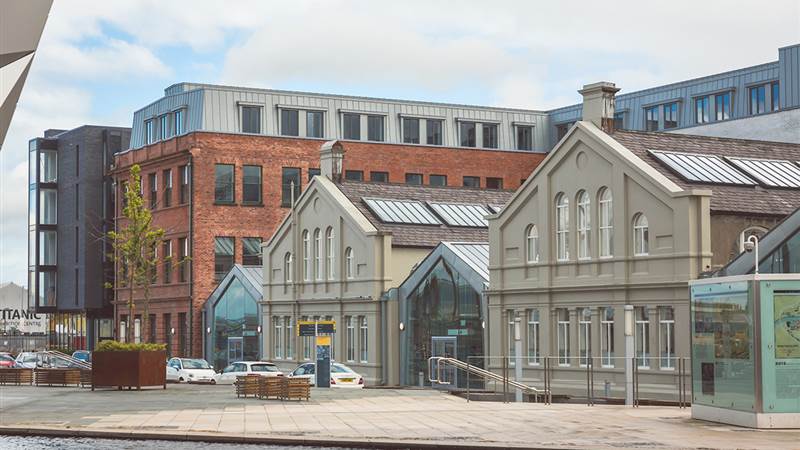 Harland and Wolff have now gone elsewhere but their original headquarters buildings remain.  The main offices of the company and the drawing rooms where the designs took shape have been converted into a hotel, The Titanic Hotel.

On the official tour you are shown through the hotel. You will see the office of Lord William Pirrie,  chairman of Harland and Wolffe.  This is the very room where he and Sir Bruce Ismay, chairman of White Star Line, the Titanic’s owner, met to agree on the construction of the three most luxurious ships afloat.

Rival shipping line, Cunard, was making much of the speed of its vessels. Its ships, the Lusitania and the Mauretania between 1907 and 1909, held the Blue Riband for the fastest trans-Atlantic crossing.

Sir Bruce foresaw that speed wasn’t everything. The well-moneyed tycoons on each side of the Atlantic would be wooed more by opulence than shaving a few hours off the journey. Not unlike today as airlines put more focus on the comfort of premium passenger by reducing the amount of leg-room in steerage class.

Incidentally, the Titanic Hotel is not unreasonably priced.  You can get rooms from as little as £110 a night.

What about the workers?

Inside the dramatically shaped exhibition building you’ll get up close and personal with the lives of the working men and women who, with great pride, spent their lives building these engineering marvels of the time.

You’ll get a ride in a sort of chairlift that will take you inside the hull of the ship during construction so you can experience vicariously and without permanent hearing loss the working conditions.  The noise of millions of rivets being hammered home hard meant many of the workers were stone deaf.

They worked at great heights without the kind of safety equipment rules we take for granted today.  Several workers fell to their death during the build.

No workers’ compensation in those days, though Harland and Wolff were regarded as excellent employers.

Belfast was one of the great shipbuilding cities of its era and the slow death of the industry hit the city hard.

Harland and Wolff built their last ship in 2003 but they did not go out of business. Like any well-run company they got out of a dying business into one of the new sunrise industries. They now build wind-power turbines as well as doing ship repair and refitting, bridge building and building and maintaining off-shore oil platforms.

Go to Belfast, definitely book a tour through the Titanic Belfast. I would recommend booking one of the tours earlier in the day before the coach hordes descend.

Who, in the turbulent years of the 70s and 80s when hard men waged war in the streets of the Shankhill and Falls Rd areas, would have believed that it would one day become a tourist attraction?

When Ireland finally gained independence from Britain in 1922 there had to be a compromise (isn’t  there always in political solutions) that accommodated the large Protestant northern counties who looked to London as their capital.

The answer was to divide the island in twain – Ireland and Northern Ireland. In fairness to the pollies of the day it was probably the only practical solution, but it brought with it the fast-germinating bitter seeds of a conflict that would last until the later part of the century.

Catholics in the newly created province were treated shabbily. They could not hold public office or a public service job. They were discriminated against in the allocation of public housing. Electoral boundaries were “gerrymandered” – drawn in such a way as to reduce the strength of the Catholic vote.

Not hard to see why they revolted against such blatant discrimination.

Various republican militias formed with the aim of bringing about a united Ireland ruled from Dublin. On the other side similar “loyalist” paramilitary units grew and war began.

Finally it evolved into mindless tit-for-tat revenge attacks. Brutish, uncompromising extremists on each side called the shots.  Literally.

A wall from the netherworld of nightmares

The physical results of the conflict are everywhere to be seen, in particular the “Peace Wall” that divided the two sides. A nightmarish construction that runs for 30 kms, up to 6 metres high, broken by a series of gates where armed British troops maintained checkpoints. 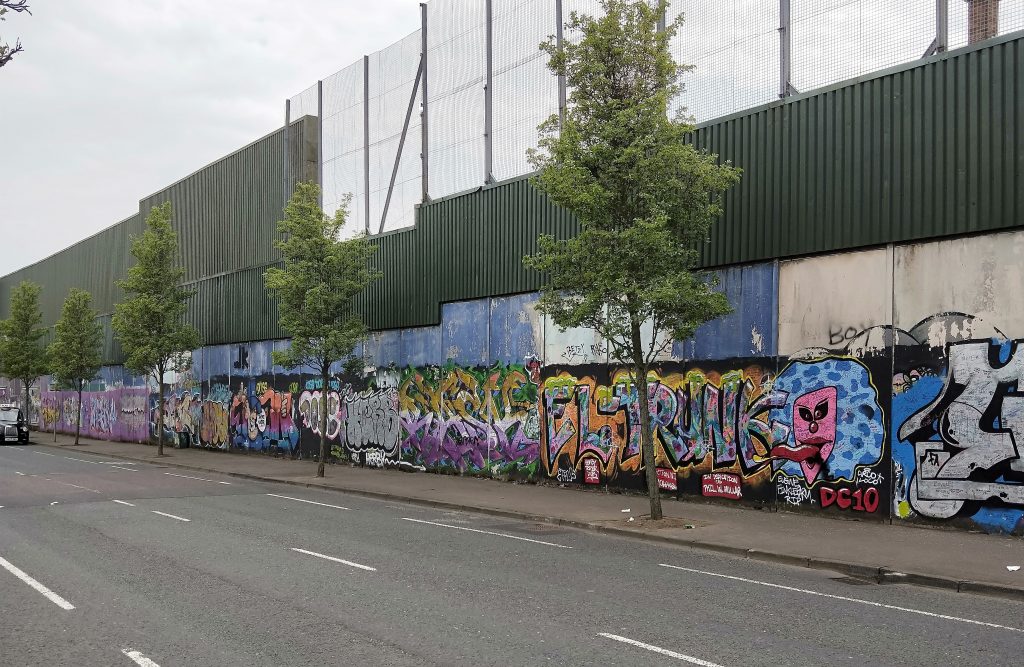 The so-called “Peace Wall” that divides Catholic areas from Protestant areas in Belfast.

Even today it is an uneasy peace and the gates are still manned and close each night at 6pm. The Troubles might be over but the divisions remain, both political and physical.

But at least it is a peace of sorts. The two sides are gradually learning to co-exist without the need for killing.

While we were there a young journalist, Lyra McKee, was shot at a demonstration in Derry by the rebel New IRA, basically a bunch of brainless yobbos who still seek to wage war.

The shooting had entirely the opposite effect to what the triggerman would have wanted.

It brought people together. We watched a vigil in front of Belfast’s Town Hall as thousands of Catholics, Protestants and others stood silently shoulder to shoulder to say “This is not us”. 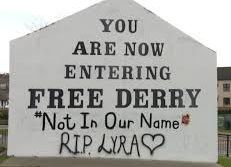 #not in our name

In Derry, where republican sympathies are still strong, the message was the same.

The British called the city Londonderry. The Irish republicans called it Derry.

There’s a famous sign on a wall “You are now entering Free Derry” that makes a plain statement about their political sympathies.

The day after that shooting even the Derry republicans signalled their disgust at what had happened. Scrawled on the sign was the message ”#not in our name” and “R.I.P. Lyra”.

While that sentiment prevails and – with care nurture – grows, there is hope for a lasting peace in the North.

We took a Black Cab tour of the Shankhill and Falls Rd areas. Mick, our Catholic driver, tried very hard to be neutral in his commentary but his sympathies were clear to see.  Not that it mattered. We got a very personal insight into the history of the conflict. 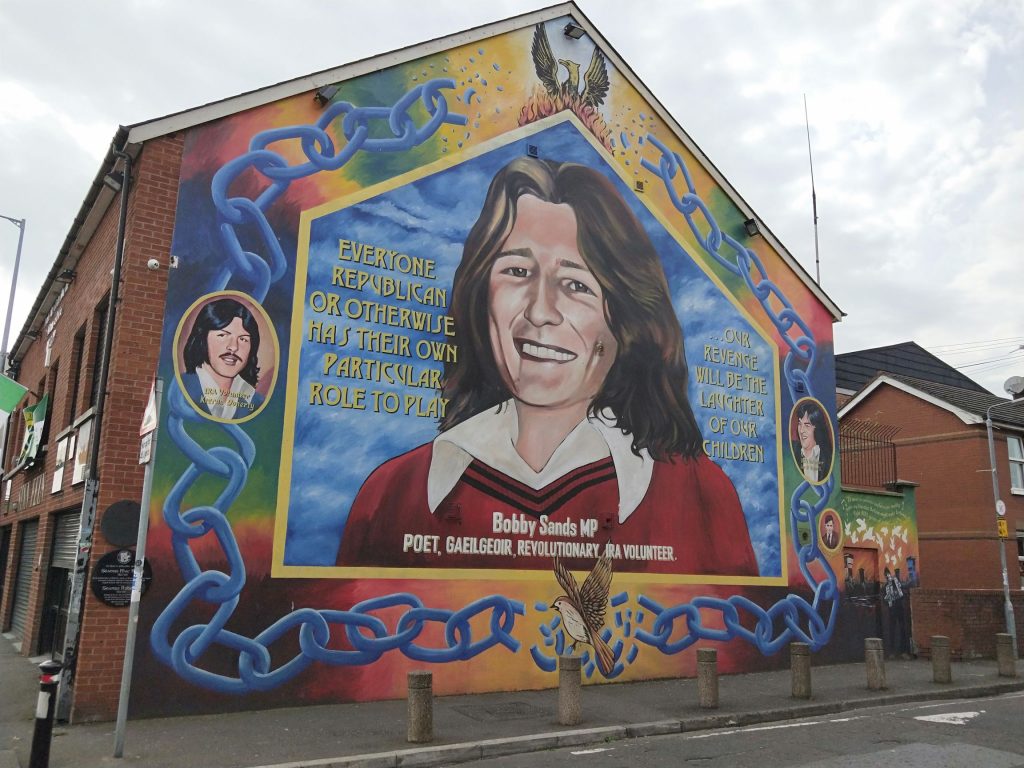 You will get to see the now famous street art – murals that reflect the history and community values of the area.  There are about 300 of them.

Probably the most famous of them is the Bobby Sands memorial on the side wall of the Sinn Feinn office. He was the leader of the hunger strikers who, in 1981, starved themselves to death as a protest in the notorious H Block of The Maze, the prison used to house political prisoners.

I would recommend a taxi tour as the best way to see the area. Even today it has been suggested that going into the wrong area in a car with the wrong sort of number plates can result in a potentially dangerous confrontation. Not fatal these days, but ugly.