If you are planning to visit Northern Ireland’s northernmost sights then planning must, indeed, be your byword because things are not as simple as they seem.

The Giant’s Causeway, Carrick-a-Rede, and the Dark Hedges are popular visitor attractions but there are traps for the beginner or the unorganised.

If you want to capture one of those iconic images – dark, brooding, almost malevolent  – then good luck with that. There will be just you and several hundred of your closest touring friends on the tree-shrouded road.

So this is the sort of shot you want, right? 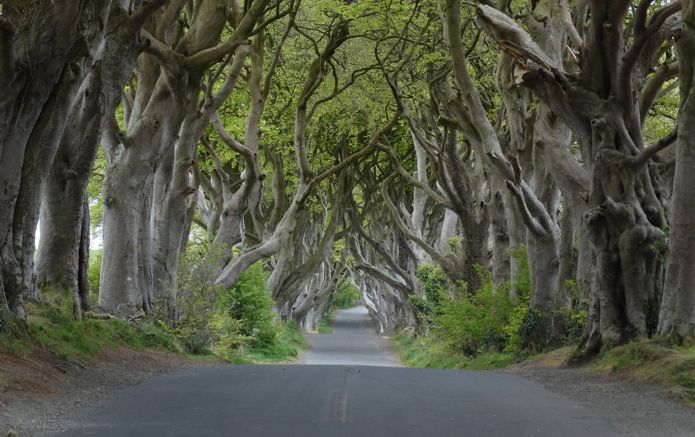 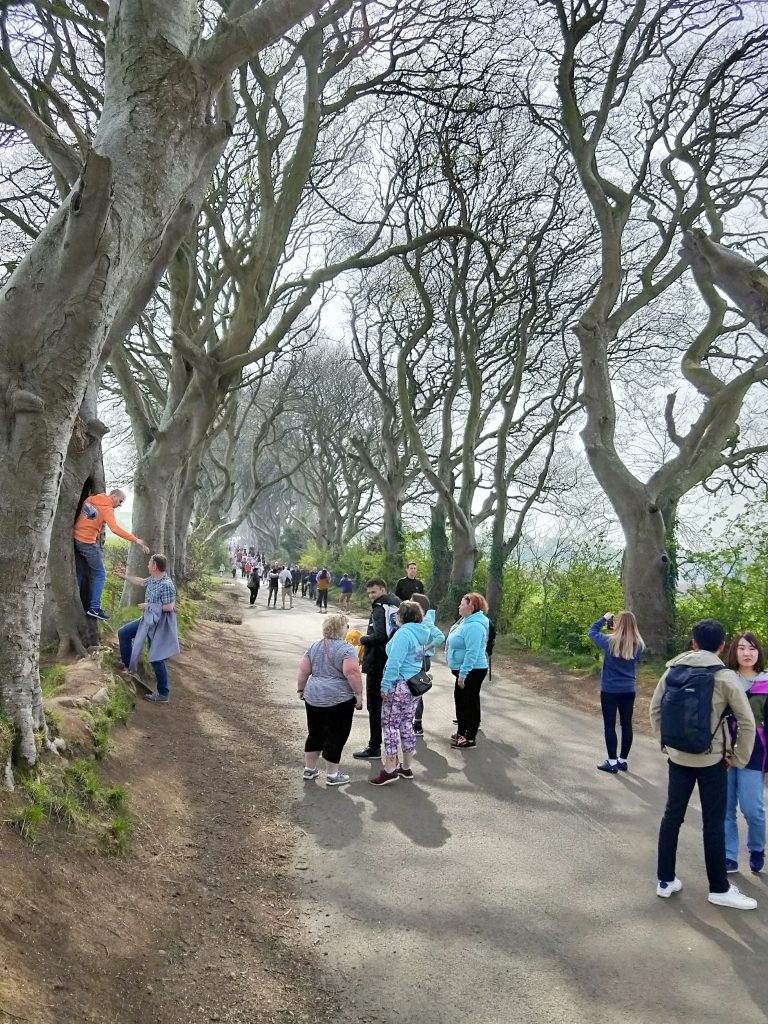 The reality of a visit to the Dark Hedges

Here’s what you’ll actually get

The problem is Game of Thrones. It was shown as the Kingroad for just 10seconds but that’s enough to flood this ancient avenue with hordes of GoT fans. 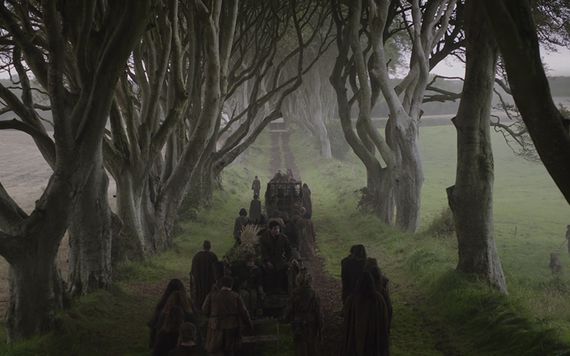 The King’s Road scene from Game of Thrones

So many now visit the location that the local authority had to close the road.  Not that this stops the Entitled Ones – those who don’t think the rules apply to them – from parking on the road.

The trees were planted 200 years ago by the local landowners, the Stuart family and were intended as a landscape feature to impress visitors as they approached the entrance to their Georgian mansion, Gracehill House.

Shown in Season 2, Episode 1: The North Remembers – On the King’s Road, Arya Stark has escaped from King’s Landing, disguised as a boy. She is with Yoren, Gendry, Hot Pie and others who are to join the Night’s Watch, in a cart, traveling north on the Kingsroad.

So what to do?

If you are really serious about getting That Shot you are best to book into the nearby hotel, ask for an early morning call to get up at dawn before the hordes get there.

You can only park legally in the hotel grounds for which there is a modest 2 Euro charge.  It’s about a 7 to 8 minute walk through the woods to the road itself.

Some of the trees in the wooded walk are also ancient and looked for all the world like Ents from Lord Of The Rings, about to march off to fight Saruman, the White Wizard.

This is the rope suspension bridge that connects the mainland to a small island called Carrick-a-Rede. The island was used for centuries by salmon fishermen because it was the best place to catch the migratory fish in season. After the fish’s migratory patterns changed, along with over-fishing, the age of fishermen on the island came to an end in 2002. Today, their legacy is an isolated, whitewashed cottage perched on Carrick: the very definition of a precarious location.

The place is now so popular that numbers crossing the bridge, strung precariously 30 metres above the ocean, have to be controlled.  Which means you must book your crossing. So don’t you be just rollin’ up there expecting to make the crossing.  You will be allowed to climb up to the bridge site but not cross it.

Speaking of the climb it is over a kilometre of serious climbing.  Perhaps this photo gives you a hint as to the arduous nature of the “walk”. 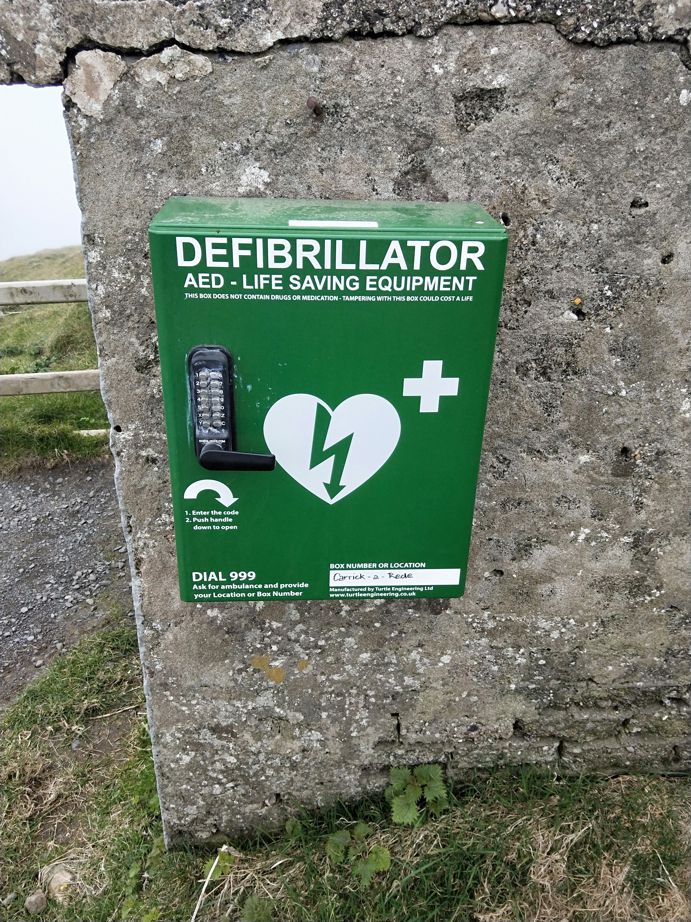 But it is worth it! 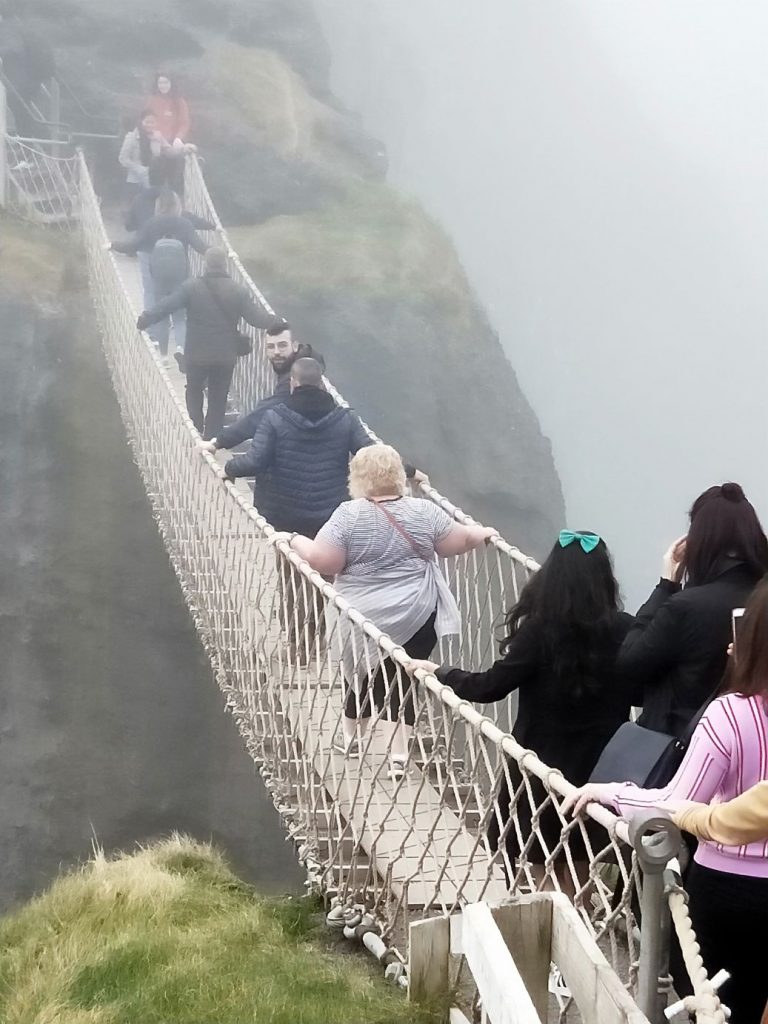 Crossing the rope bridge to Carrick-a-Rede

As you can see the day we were there there wasn’t a a lot of scenery to be seen. 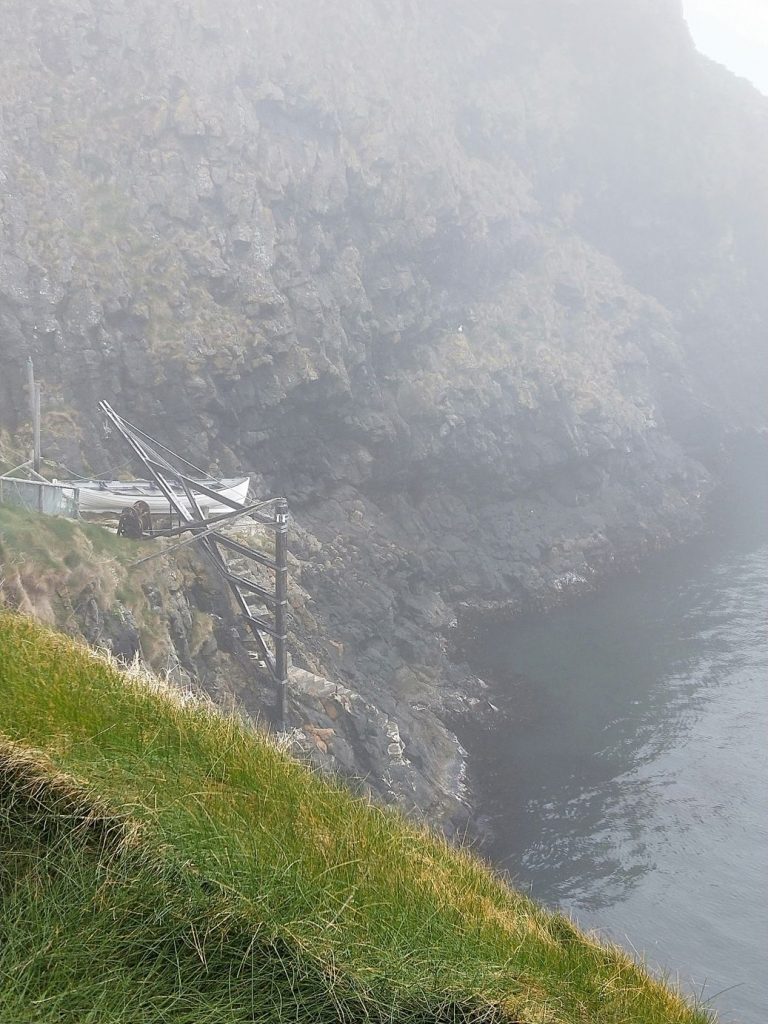 This is the way the salmon fishermen launched their boat.

To make bookings go to https://discovernorthernireland.com/Carrick-a-Rede-Rope-Bridge-Ballintoy-Ballycastle-P2829/

First piece of advice: Pay to go through.  No, no . . .  you don’t have to.  You can walk down there for free but for the fairly modest entrance fee you get parking at the door.  Incidentally, park in the wrong place on the roadside “free” parking and the ticket could cost you a lot more than entrance to the whole experience.

You will also get one of the excellent audio guides.  Much recommended to understand how this remarkable geological feature was formed.

Let me let you into a secret:  Finn McCool, the giant, really didn’t build it.

It’s formation 60 million years ago is, in fact, one of the curiosities of the natural world. 40,000 near-perfect hexagonal pillars make up one of Ireland most amazing visitor experiences. Again, there will be squillions of other people there but somehow it doesn’t detract from the experience.

Tip for young players:  Walk the 1km down to the causeway, but catch the bus back.  It’s otherwise a heck of a climb.

Curiosity. From here if you look north you can see the The South, and later if you go to Malin’s Head, the northernmost point in Ireland, by looking south you’ll see The North.  The clue is in the capital letters. Looking north you’ll see County Donegal which is a part of the Irish Republic. And similarly looking south you look into Northern Ireland