Don’t let anybody tell you that Adelaide is a boring city.

That was the impression I was given from various sources before I arrived there.

To start with, it’s a very pretty city. The surveyor who laid out the central city area created a huge open parkland around the perimeter of the fledgling town. The result: It’s like someone planted a city in the middle of a park. Which, is, of course, exactly what happened.

The main streets are broad, tree-lined boulevards. The built environment has very largely not been upgraded with a bulldozer over the last century. Thus many, if not most, of the beautiful heritage buildings remain, giving the city a distinctive historic character.

My first encounter with that special character came before I even left the airport.

I came face to face with a World War 1 Vickers Vimy bomber.

Two Adelaide brothers, Ross and Keith Smith, in 1919, pulled off an aviation feat that according to many experts was every bit as momentous in its time as the landing on the moon.

This was done sitting on wooden benches in an open cockpit, chilled to the bone by freezing temperatures at altitude. No satnav, not even a radio. Just a compass and some clever dead-reckoning navigation by Keith Smith.

Over the decades that followed their incredible feat was overshadowed by that other great Aussie flier, Charles Kingsford Smith . . . no relative.

Pity, because the brother’s achievement was, in fact, far more daring, far more dangerous, far more difficult than any of Kingsford Smith’s exploits.

The Smith Brothers were knighted by His Majesty George V, on December 22, 1919.

The aeroplane they flew is now housed at Adelaide Airport.

As you come out of the arrivals area turn left and go out past the Parking Valet counter.

There’s a marked path to the hangar with bronze plaques set into the concrete that details the risks and trials they faced.

Well worth the walk.

But, back to Adelaide.

For a good insight into the city, take one of the free bus trips that circle around the central area.

The 98A or 98C bus which will take you through North Adelaide, where the toffs of the time built their impressive homes. The toffs of today are probably still in residence. It will then track alongside a short stretch of the Torrens River before circling around and through the CBD.

There’s also more than just a dash of whimsy in some of the street art. 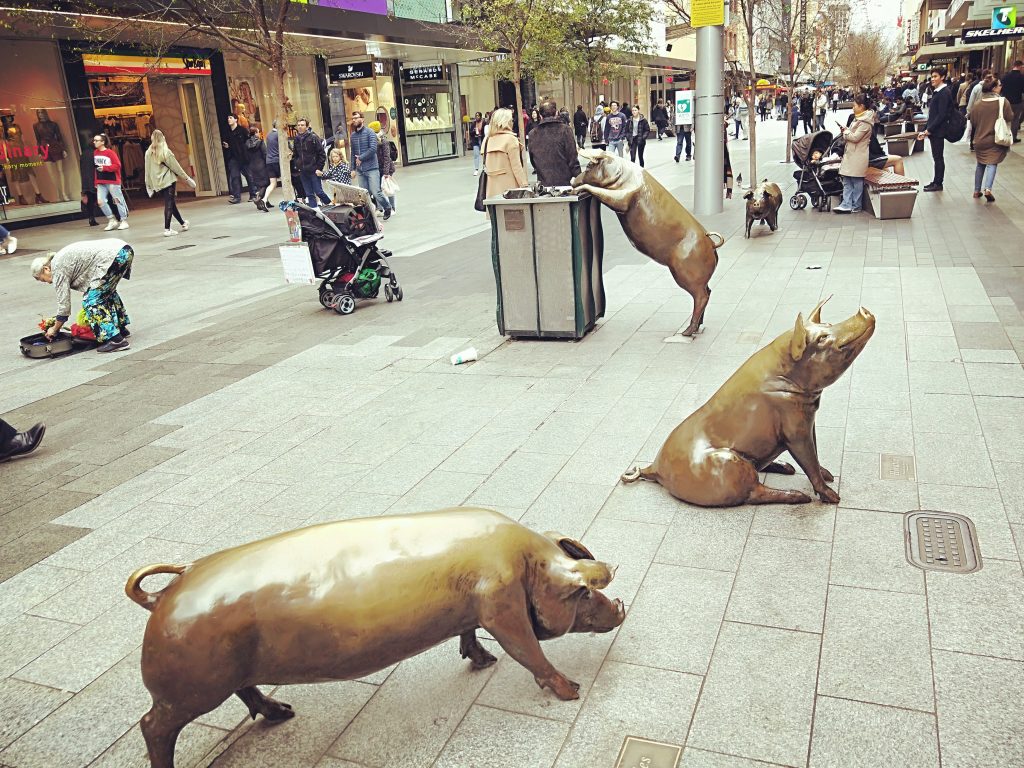 Was only there there one night but what was already clear is that the city has a vibrant café and restaurant scene, particularly along Rundle St east.

You can get everything from Uighur to Australian indigenous cuisine and all points between.

Enjoyed an excellent slow-cooked lamb ribs dish at a great little Greek taverna, Eros, that first night and looked forward to exploring more of the area the following night.

So . . . second day in Adelaide, the capital of South Australia.

Acting on advice from the lovely women at the Adelaide Information Centre, I took a look in at the APY Collective Gallery.

It’s a collection of works from a group of aboriginal women artists.

First impression was that the First Nation people in this country developed the pointillism art technique several tens of thousands of years before George Surat and Paul Signac in the late 19th century.

That, along with a heavy splash of impressionism, and you have this vibrant art form. 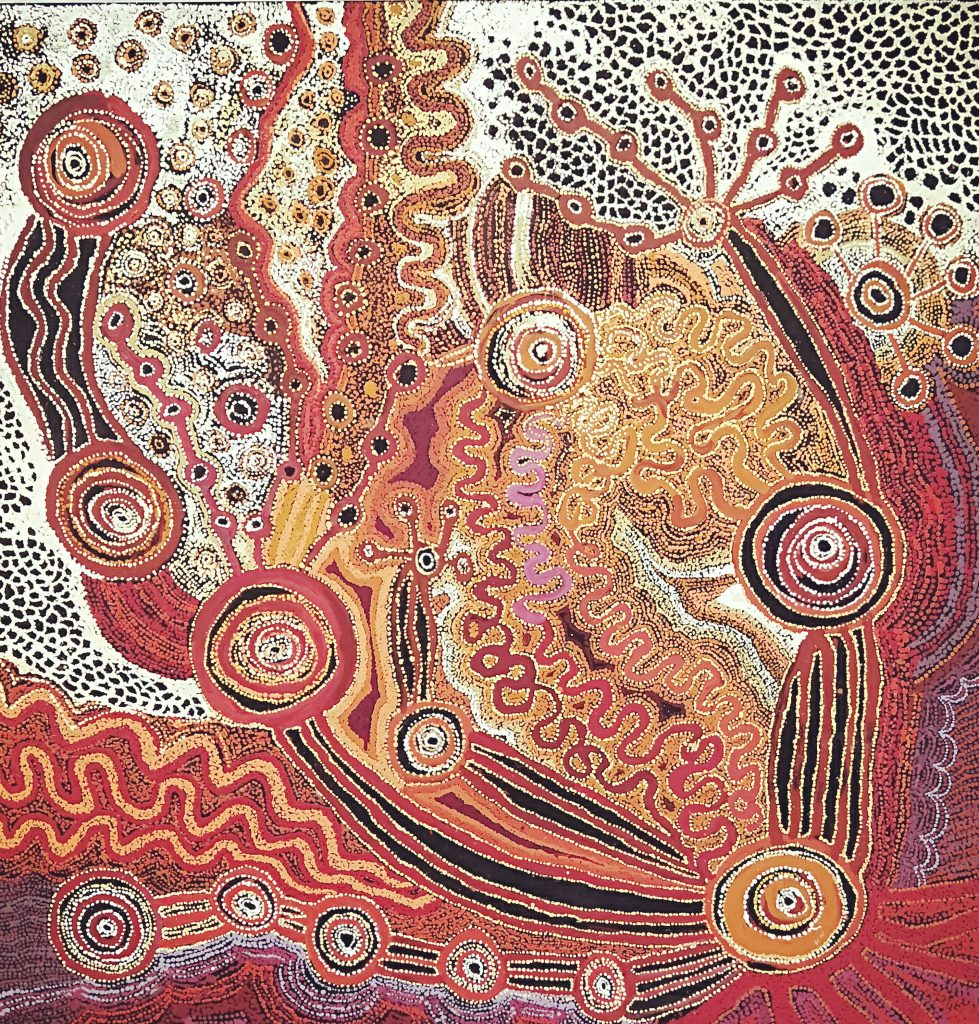 I was intrigued by the use of a circle motif in many of the works and the young woman in charge said they could represent watering holes or camp sites depending on the colours used.  Thus painting was a way of transmitting important information from one generation to the next.

Hahndorf in the hills

In the afternoon, again acting on advice, I caught a bus to the “German” village of Hanhdorf in the hills behind the city.

Certainly, it was founded by German immigrants in the late 19th century, but you’d never know it from the architecture.  It’s a “German” village as built in the Australian landscape from locally available materials, mostly a beautiful mellow yellow stone, reminiscent in many ways of Britain’s Cotswolds. 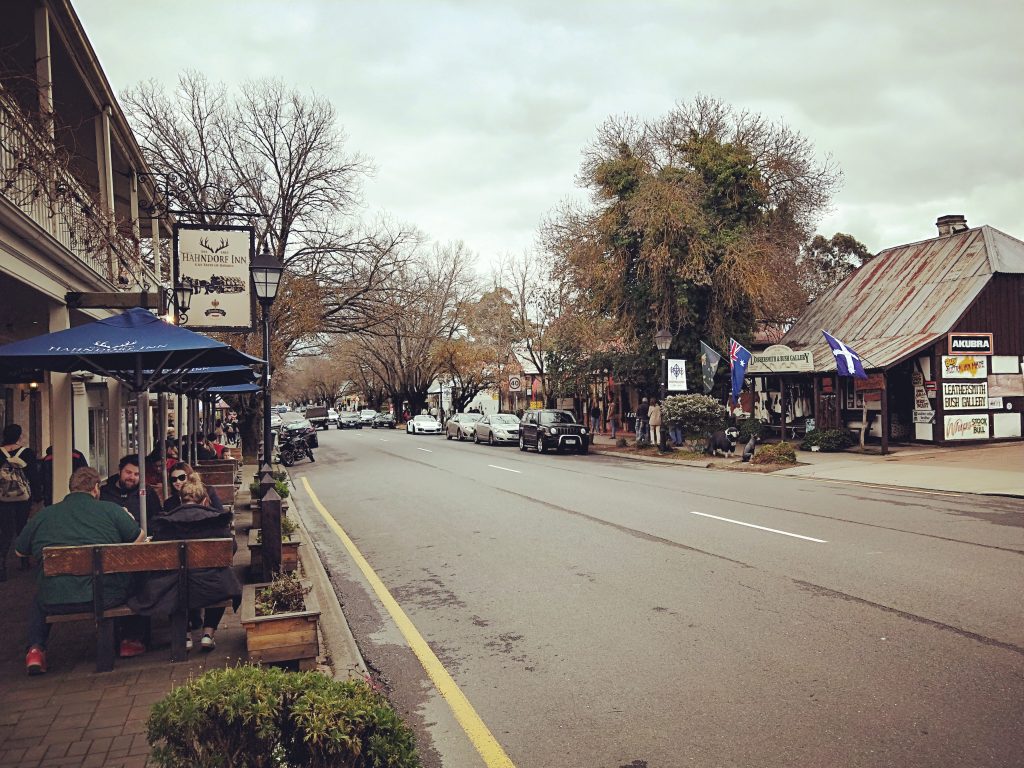 Even on a chilly winter’s day it was thronged with people wining, dining and shopping in the cottages re-purposed as cafes., bars and boutiqey shops.

Some of them still retain their original purpose, most notably the local pub.

Again, in one of the shops, I came face to face with Aboriginal art and from one of the artists learned what a complex historical narrative it conveys.

Back in the city I sallied forth looking for dinner and spotted this little alley way covered colourfully with a ceiling of umbrellas.  Sadly, the cuisine on offer wasn’t quite what I was after and instead I settled on a nearby Thai restaurant that did an excellent Pad Thai curry. 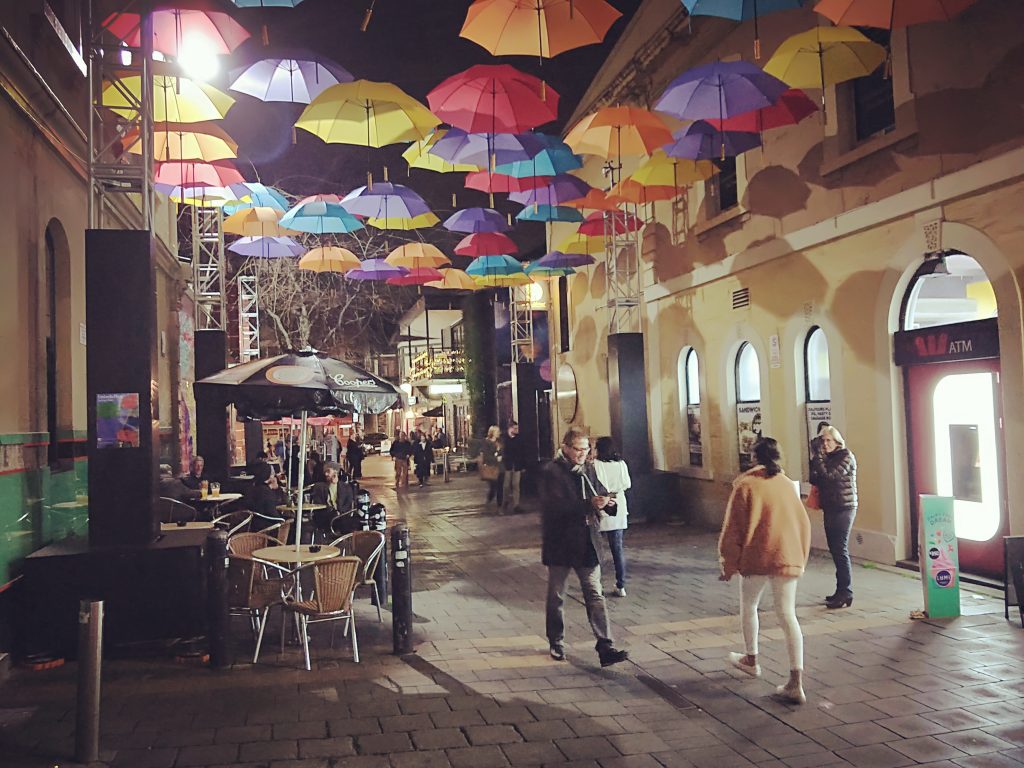 And with that my exploration of the city came, sadly, to an end because the following morning would, perforce, be focused on getting to the station to catch the great overland train, The Ghan, the reason for being here. You can catch my experience on that adventure on one of the other blog posts.

So, dear people, don’t sell Adelaide short. It has a lot going for it and I could but experience less than a tithe of its attractions.