The Ghan. Strange name for a train, yes? More about that later. But this oddly named railway journey is one of the great rail expeditions in the world.

It’s a Sunday afternoon after an excellent on-board lunch and I’m sitting back in my little cabin on The Ghan watching the lush green fields of coastal South Australia roll past my window on a three day journey to Darwin in the north of the country.

This train is an amazing rig. Everything about it is oversize.  Bit like Aussie itself really.

It’s nearly a kilometer long, weighs 1768 tonnes. To attend to the 200+ passengers there’s a crew of 49, including four drivers who work in two-at-a-time shifts, a maintenance engineer, chefs and a bevy of passenger service people, all of whom are very helpful and friendly. And all of whom have to be accommodated on board. 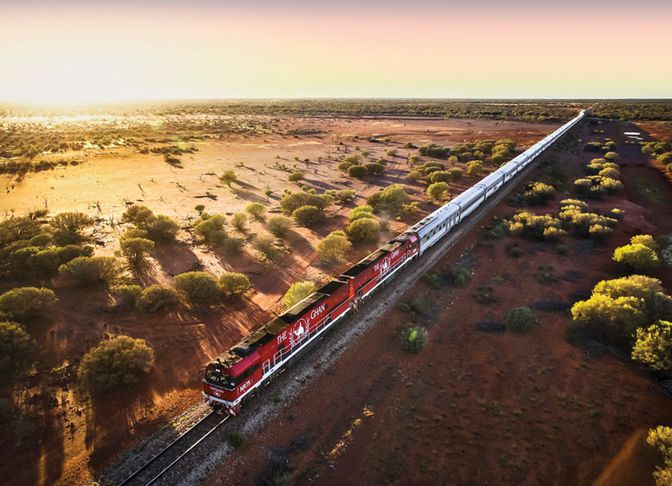 About that name: The original camel trains that carted goods to and from the back country stations in the 19th century were driven by cameleers generically referred to by Aussies as “Afghans” regardless of whether they were Afghanis or Pakistanis. You can learn more about them from “Australia’s Afghan Cameleers”, a post on the Australian Geographic website.

First item on the agenda of the day was lunch. Having had a bacon-an-egg breakfast I didn’t fancy the thought of a heavy lunch.

“No worries” as our carriage steward would say. I had a piece of beef that was small and perfectly cooked, followed by a well-crafted honey ice-cream desert.

All the drinks are free and regrettably there were a couple of passengers who couldn’t resist the siren song of free booze.  By dinner time they were a bit the worse for wear and starting to get loud. 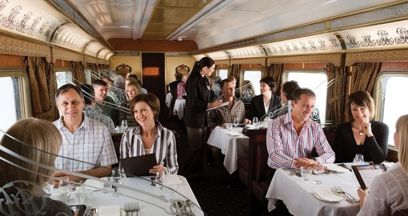 Dinner was the same outstanding quality cuisine. By then I was definitely of the opinion that, since the sun was well over the yard arm, I could also enjoy a glass or two of the excellent Aussie reds on offer.

This is the 90th anniversary trip of the Ghan.  It left on the same date as the original train in 1929.

To celebrate, the company arranged an outdoor birthday party in the evening, so after dinner in the middle of the outback, we sat out in the dense black dark of the desert night. A line-up of well-known Australian musicians, backed by an excellent band, gave us two and a half hours of entertainment, topped off with a 15 minute fireworks display that must have seen several tens of thousands of dollars go up in smoke and stars. 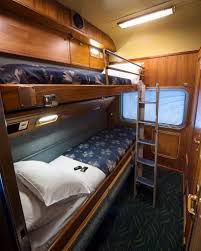 All ready to bunk down for the night

By the time I got back to the train the staff had converted the day couch into a bunk bed and I settled in, lulled to sleep by the gentle rock-and-roll of the carriage as we trundled through the night towards Alice Springs.

Awoke to the sun’s unblinking eye glaring down from a cloudless blue sky, scorching the red earth of the desert.

The bunk bed, folded down from the back of the seat was narrow but comfortable enough, Like everything on this train things like the bedding were first class, which made for a good night’s sleep, ready to face a day of boredom watching the unchanging face of the desert roll by.

Wrong. Wrong. Wrong. Perhaps for those with no eye for subtlety, for the shifting textures of nature, that may be true but if you hearken to the nuances of the world outside you’ll be captivated by it’s ever-changing character.

The green of the coast had given way to the reds of the Australian desert. You could be tempted to think that watching a desert roll past would be about as exciting as watching grass grow.  Which, out here, doesn’t happen all that much. Instead, there’s a fascination to the sameness of it all.  Yet it isn’t really all “the same’. There are all sorts of oddities that break the “sameness”. 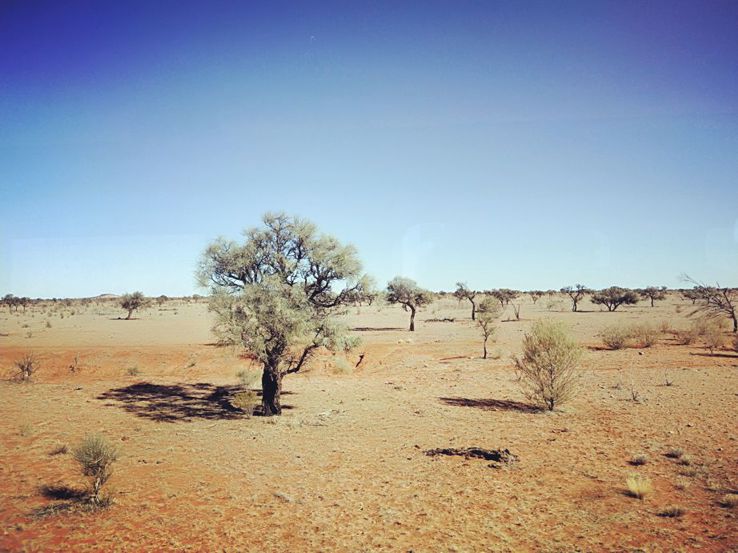 When watching the scenery palls a bit there’s always the camaraderie of the lounge car. My fellow travelers were a mixed lot, some New Zealanders but mostly Australians. What surprised me was the absence of international travelers. The assembled were nearly all, if not all, retired. For many this wasn’t their first trip on the Ghan or its sister trip, the Indian Pacific, a 2,687-mile (4,325km), four-day/three-night journey between Sydney and Perth.

Yep, they were a mixed lot my fellow Ghanians. Rick was formerly CEO of a sizable business, Graham and Jim were doctors, there were a couple of academics, a former senior government servant.  I mean really senior.

And there was blind Peter. Yes, totally blind, but clearly an erudite fellow who enjoyed good discourse. This wasn’t his first trip on the Ghan and I suspect he just liked the fellowship of the lounge car. He certainly wouldn’t have traveled for the scenery. Liked a good red wine, did Peter.  There was usually a glass of Barossa’s best not far from his hand. Never affected him for the worse, unlike some.

I didn’t opt for the crocodile option on the lunch menu nor the kangaroo at dinner time, but then I’m probably not exactly a degustation adventurer. For those partial to experimenting with very, very Australian cuisine this was right up their alley.

Main attraction of the day was the stop at Alice Springs. I chose, because of an abiding interesting all things aero, to take a tour of the Flying Doctor Service HQ. Not a small outback operation any longer. Something like 70 modern aircraft deployed all across this mostly sparsely populated continent.

The tour also included a nearby wildlife centre for a look at some of the less attractive local population: snakes, spiders, lizards and crocodiles. A signal learning experience that turned some long-held beliefs on their head.

For instance, according to Rex Neindorf, the centre’s front man, and contrary to popular opinion, you are most unlikely, or damned unlucky, to die of an Australian snake bite, even though they are some of the most venomous in the world. Other snakes in the world are heat-seekers, but seeking heat in the heat of an Australian desert would be a losing survival strategy.  Aussie snakes have poor visibility and rely instead on movement to detect prey or threats. Thus even if a reptile is close, and Rex defined that as 30 to 50 cms, a foot to 18inches, all you have to do is stand quite still and the animal will slither away.

They also have tiny fangs, microscopic even. So long as you are wearing a pair of shoes and long pants they literally can not bite you.

Then there was the crocodile, another kettle of lizard altogether. As Rex pointed out, even if you can’t see them in their underwater stalking lair they know exactly where you are and what you are doing. They can strike with swift and savage fury at any moment.

In this instantly inter-connected world it takes a moment’s reflection to realise how it wasn’t always thus.  At the Old Telegraph station, a handful of 19th century buildings overlooking the waterhole from which Alice Springs took its name, and shaded by gum trees, you catch a look through the one-way mirror of time to when messages were tapped out in Morse code and carried along wires strung thousands of kms across the Outback.

Prior to 1872 getting a message to “Home” (i.e. London) and back, took three to four months roundtrip by boat. The possibility of speeding that up to a matter of hours represented a commercial opportunity that was too hard to miss. The South Australian Government ponied up $250,000 to build a telegraph line from Port Augusta to Palmerston (now Darwin) where it could connect to an undersea cable.

It took 2 ½ years and, as is the way with most government contracts, cost twice as much, but the prestige was worth it.  Remember, this put Adelaide ahead of Sydney and Melbourne in the communication stakes.  Now it took a mere five hours to get a message there and back.

The Alice Springs station was one of 12 strung along 3000kms of wire. Each one receiving and repeating the message.  Bit like Chinese whispers in dots and dashes.

The following day gave me a chance to see the famous Katherine Gorge, a network of 13 separate gorges carved by an ancient river. 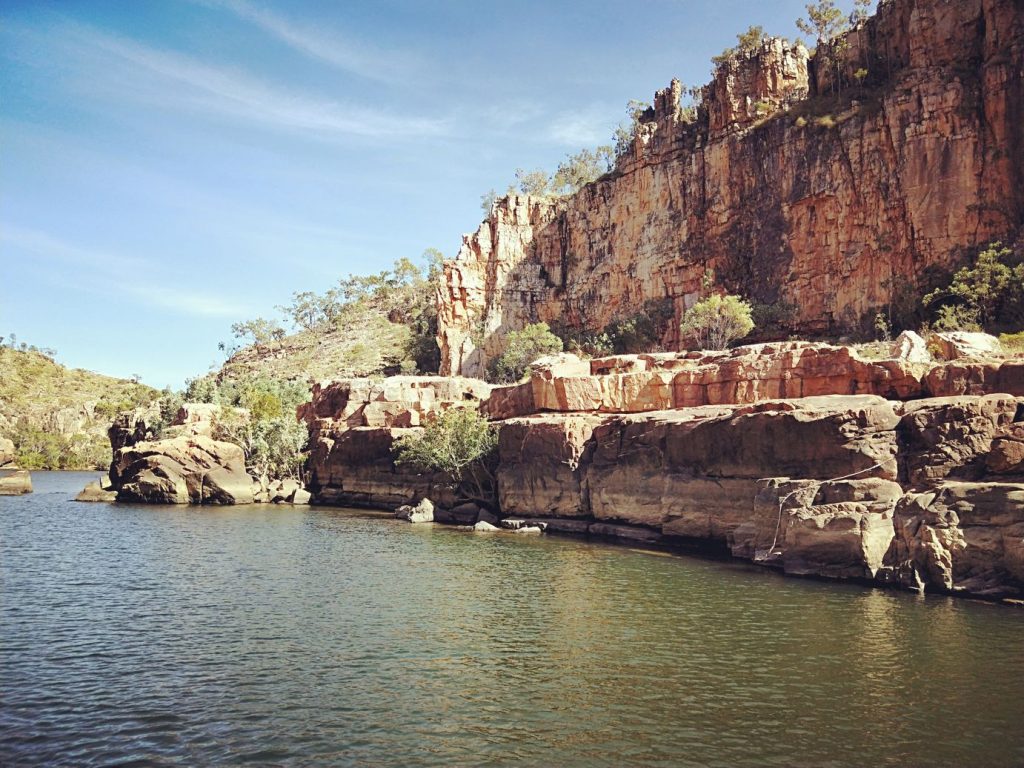 While it was dramatic in its form, by far the most interesting part of the tour was learning about the Aboriginal history and culture. Petroglyphs (that’s rock paintings to the unlettered) that are thousands of years old can still be seen.

The gorge is home to some of Australia’s oldest Aboriginal art, indeed some of the oldest and longest running historical records of any group of people in the world. Paintings in all styles appear on sandstone walls throughout the gorge system. Believed to date back 40,000 years, paintings here recount Dreamtime creation stories. 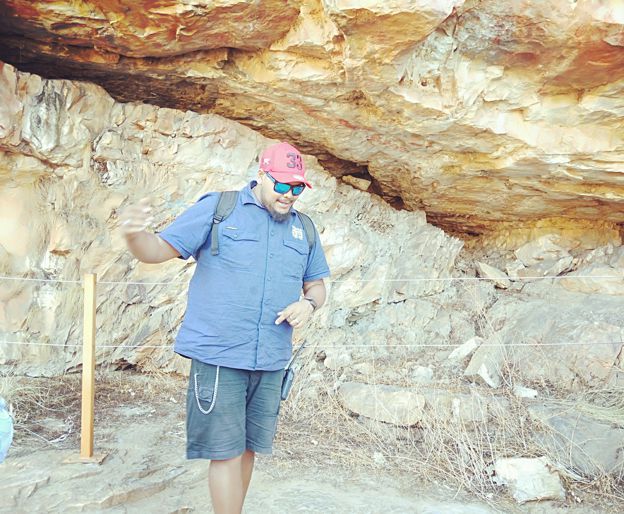 A member of the local Aboriginal tribe tells us stories about the rock paintings.

A local Aboriginal guide told us of the significance and meaning of the paintings, telling us they illustrated everything from hunting methods to laws and ceremonies as a means of imparting knowledge to future generations. 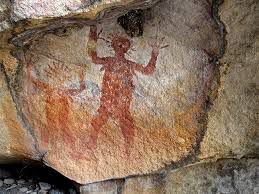 Back on the train we trundled the last section into Darwin. The scenery had changed again to a sort of open version of tropical bush. 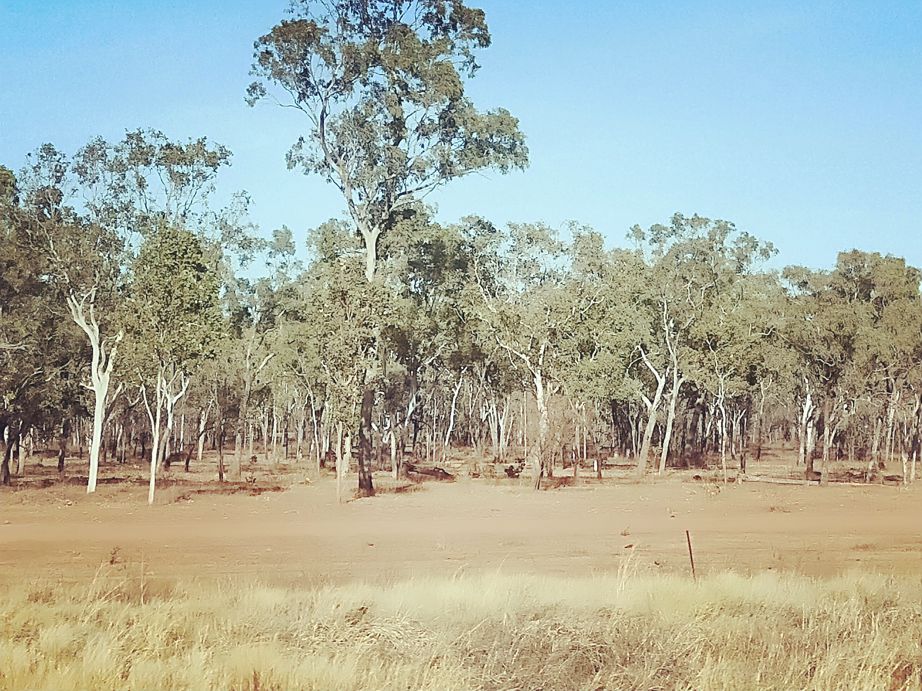 Darwin surprised me.  Ok, it might be ignorant, but for some reason I kind of expected something like a rough and ready, dusty, corrugated iron outback town. What a surprise to find a slick modern connurbation with all the amenities you would expect in any international city.

A yarn about Darwin’s attractions, however, will have to be the subject for another day.