I often get asked “What is the best time of the year to Visit Britain?”

Well, right now is a great time to plan a visit to the UK. The Covid pandemic has meant that visitor numbers are way lower than usual and that means the big attractions are not crowded-out with “bloody tourists”.

But is it safe?

There has been a recent spike in infections in the UK but it is now tapering off again. Given that you aren’t likely to arrive there for several weeks if not months, the case numbers should have fallen further.

Rural Britain and Wales have much lower infection rates than the densely populated cities and rural Britain is where you would probably spend much of your time.

So, on balance, for fully vaccinated travellers it’s a good time to plan a road trip in Britain.

But what is the best time of year to make that trip?

Having been there in all seasons the short answer is . . . any time.

But some seasons may be better than others.

In a pre-pandemic world I would have said late April to early June or very late August to late October. You get the best of spring flowers or autumn foliage that way.  The weather, though variable, is also reasonably mild.

These days, however, with visitor numbers probably lower than usual, even high summer is worth a punt.  Certainly the weather is a better bet.  The school holidays, however, will add to crowds. They usually run for six weeks from late July to early Sept.

On a visit to the UK in the 80s, in late November, we went into a café on Oxford St for lunch. When we came out it was snowing.  Magic! Oh to be in Oxford St with the Christmas lights and a gentle dusting of snow.

The locals were not so enthralled. “Too early for snow”, they grumbled. 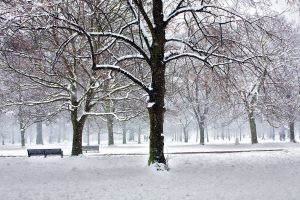 I remember getting a fantastic photo of Hyde Park all black and white in full colour. The fresh snow on the ground contrasted with the dark, leafless trees.  This isn’t it (it has long been lost) but it conveys the same imagery.

These days, the Winter Wonderland in Hyde Park is a major attraction with its combination of fairground rides, market stalls and an ice skating rink. There are other huge markets at Leicester Square, Southbank between the London Eye and the Royal Festival Hall, and also between London Bridge and Tower Bridge as well as Greenwich. The Borough Market in Southwark St is a year-round delicatessen delight but at Christmas it gets into the spirit of the season with festive treats likemulled wine, Christmas puddings, and mince pies aplenty. 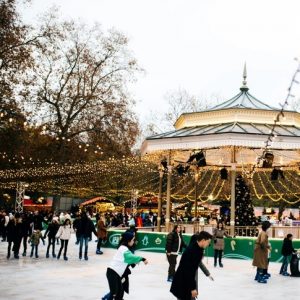 A well rugged-up visit to the Christmas market in Bath was one of the most memorable moments of a trip just before the madness of Covid smashed its way into the world.

Many attractions, however, are closed or only open on weekends during winter.

Speaking of the weather, being an island, the year-round climate is temperate.  You don’t get the extremes of heat and cold that can be experienced in continental countries. Anything below freezing is usually front page news and anything above 27C/80F is not common.

The hottest and sunniest month is July, closely followed by August, but they have nothing like the temperatures of, say, the Mediterranean countries.

One certainty:  Be prepared for rain. I carry a tightly bundled-up plastic rain jacket and a compact umbrella as standard equipment.

On all but summer visits I carry a heavy woolen coat so that, should the weather get cold, I’m prepped for it. I wear it on to the aeroplane to keep baggage weight under control.

There are some times and places it is best to avoid.  Bank holiday weekends can result in nightmarish travel congestion in popular areas like Devon and Cornwall or The Cotswolds. You can get a list of Bank Holiday dates at https://www.gov.uk/bank-holidays.

Beware also of timing a visit when there is a major festival or event on in a town. Glastonbury or the Edinburgh Tatoo, for example. Unless you actually want to go to the festival stay well away. Prices are sky high, even if you can find accom.

You can get info on festivals at https://www.visitbritain.com/ca/en/festivals-and-events#